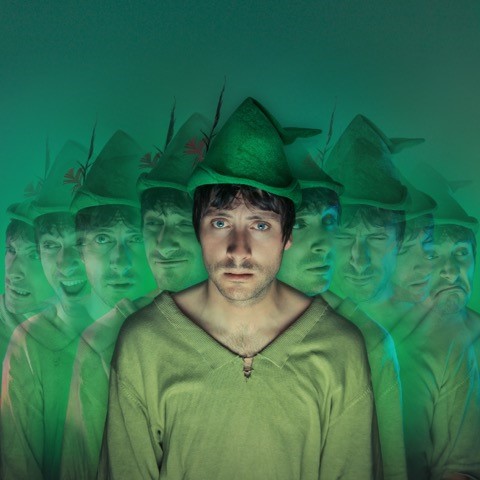 Caitriona Daly’s play, Panned, at Project Arts Centre takes us into the mind and heart of a young man adrift in the world, unsure of himself, struggling with self-image, floundering in his relationship, beset by bouts of rage, resentment, rejection, alienation and despair. The “adrift” bit is pointed at in the evocative set by Laura Honan, the lone figure crouched on a raft somewhere in Dockland, obscured by swirling fog.  Yes, fog is becoming an irritating cliché on the Dublin stage, though at least in this case it serves a theatrical purpose.

Ste Murray’s performance as Sean (and several other characters) is powerful is every sense: physically, emotionally and vocally.  If anything, it suffers from being too high-powered. Relentless in its intensity and Murray’s speed of delivery, it leaves one feeling bludgeoned. Clearly this is in keeping with Daly’s writing and director Eoghan Carrick’s intentions. However, the non-stop pace leaves little room for individual lines and moments to resonate with the audience so that the actor’s immensely powerful performance seems for a while to be on the one note – which it isn’t, it is just that we feel punch-drunk.

At the core of the play is not just the emotional turmoil of an individual but the extent to which so many of his contemporaries share elements of his insecurity, hiding behind the many masks that young men assume to maintain the appearance of being cool, sorted, one of the lads. Forced mateyness, jokes, jabs and jeers abound as they flounder around, defining themselves in terms of jobs, established positions and incomes.

Daly has hit on a seam of truth about young men and it would be interesting to see her return to it in future. There is a lot of seriousness and integrity in the writing and the play which runs at 55 minutes without interval, is well worth seeing  as it continues its run until November 17th, at 7. 45 nightly.