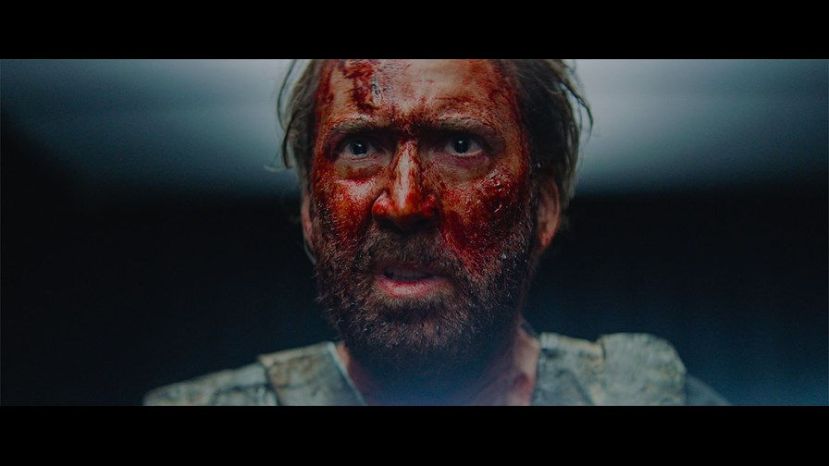 Red Miller (Nicolas Cage) and Mandy Bloom (Andrea Riseborough) have been living a life of quiet isolation in a remote location in the Pacific Northwest. The year is 1983 and the couple seem content in their lives despite or because of the calm. That is until a motley crew arrives in town. They are members of a cult and their leader Jeremiah Sand (Linus Roache) sees Mandy and decides he must have her! From this point on, their lives will never be the same.

This is the work of director/ writer Panos Cosmatos, who previously made Beyond the Black Rainbow back in 2010. This new work is a classic revenge film, with our hero of the day, Nicolas Cage, fighting all and sundry. If you’re after something with a nuanced, subtle plot, look elsewhere. This is all about style with sepia tone murky visuals and a great score by the sadly departed Jóhann Jóhannsson in one of his last works. It is a step away from his usual work and heavy on grungy electric guitar.

One interesting thing from an Irish perspective is the inclusion of both Ned Dennehy (Brother Swan) and Olwen Fouéré (Mother Marlene) amongst the cast list. Both have fairly substantial roles and do well as sinister cult members. It may be a bit straight forward for actors of this calibre but they look like they’re having a ball camping it up.

This film has cult classic written all over it and will no doubt be screened late at night in movie theatres for years to come. It has the feel of a lost John Carpenter film, something that was made but caught up in some long-winded legal dispute never to be screened. The team involved make no excuses for their love of trashy horror films from the 80s. The plot is slight in the extreme as we follow Red (Cage) as he battles his way through the latter half of the film. Nicholas Cage has had a rough time in recent years with some truly awful films. While he only has a handful of lines of text here, he is quite captivating to watch and fills the screen! Does the Nicholas Cage Renaissance start here? Probably not, but at least he’s found his mojo one last time!