Under the Wire – Film Review 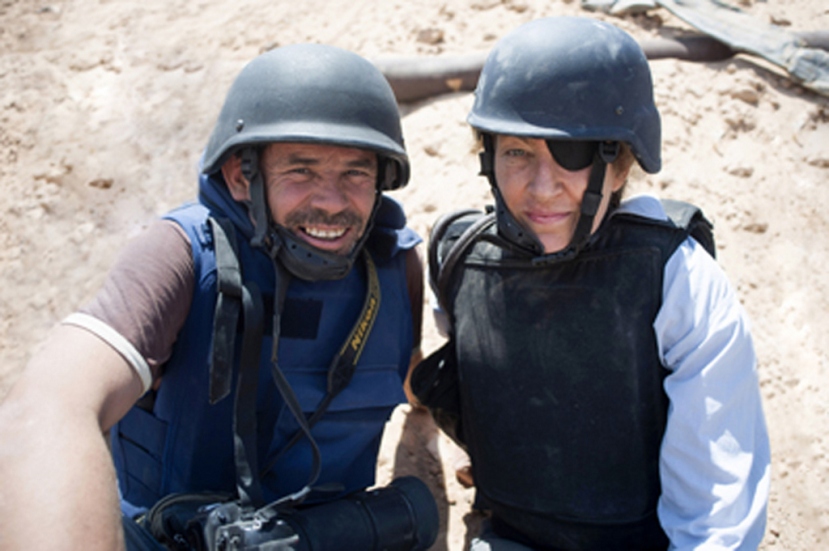 Under the Wire – Film Review by Frank L.

Marie Colvin, with her trade mark eye patch, was the Sunday Times war correspondent who had an insatiable need to expose the grotesqueness of war. She knew the everyday stories of civilians, particularly women and children, who are the eternal victims of the monstrosity of violence that war so indiscriminately delivers. This film is an insight into her work and how she died.

In February 2012, Colvin and Paul Conroy, a photographer but also a British Army veteran with a tough-as-teak inner core, entered illegally into the besieged city of Homs in Syria through a tunnel. From the outset, their mission was dangerous in the extreme. Conroy used his camera with an eye to recording the chaos but the footage that he created is intimate, immediate and records the horror. In addition, as he is still alive, he is able to provide a commentary to a great deal of the footage. He chooses his words carefully; they are measured. They add to the constant noise of explosions and shooting of the footage. This is the hell in which the civilian population of Homs was incarcerated. At times it depicts moments of grotesque personal tragedy like when a woman who works in the hospital encounters, by chance, the corpse of her grandson. Nothing is too horrific to take place. He shows the medical staff working to the best of their ability in this nightmare.

It shows Calvin and Conroy meeting a French film crew which had also managed to enter the besieged city. The focus is then on Calvin in the period before the attack which killed her and a member of the French crew. It is disturbing. The entire generates an immediacy and rawness.

Conroy although seriously wounded explains how his army training provided him with skills to keep himself alive. He suffers a wound in his leg the size of a fist. His extraordinary mental powers coupled with his army training enabled him to create a tourniquet thereby staunching the flow of blood. As a result he lived to tell the tale.

Conroy is a tough man but he is also an engaging one. His commentary adds great depth to not only his footage but also to the entire piece. There are brief interviews with friends of Calvin and the staff of the Sunday Times which all add to an understanding of the phenomenal risks that were being taken. It is all contained within an hour and a half of unsettling but absorbing viewing.