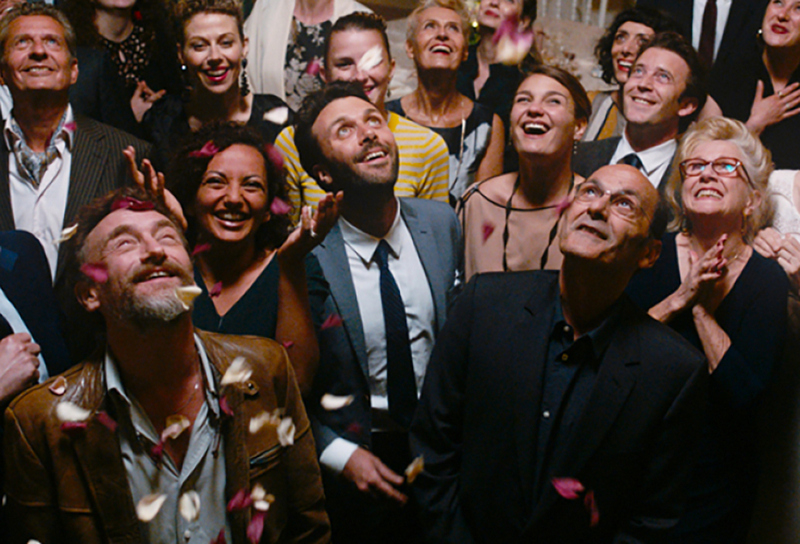 Warning: If you’re planning for your BIG DAY in the near future, this is a film you might want to avoid! Following their recent success with “The Intouchables”, directors Olivier Nakache and Eric Toledano’s latest film, a hilarious tale of the strains and near-disasters of a frustrated wedding planner, will surely raise the blood pressure of a prospective bride or groom to a dangerous pitch!

From “My Best Friend’s Wedding” to “Father of the Bride” we’ve seen how getting to the altar is fertile ground for comic situations but few films have tackled the subject with the wit and madcap verve of “C’est la vie”. Struggling with the capers of the disorganised catering staff, uncooperative musicians and one grouchy anti-technology photographer and his inexperienced assistant, the irascible event planner, Max (Jean-Pierre Bacri), organising a sumptuous wedding in a 17th century French château, must also try to cope with the constant demands and complaints of the boorish groomzilla Pierre (Benjamin Lavernhe).

When we first meet Max he is trying to remain calm while a parsimonious young couple come up with endless suggestions as to how to keep down the cost of their wedding. Having conceded on the flowers and the menu he finally loses his temper and suggests that they ask their guests to arrive bearing Tupperware containers with home-made salads and ready-made desserts. We can see from the start that subtlety and tact are not part of his make up!

Arriving at the château in the company of his pyjama-clad brother-in-law, Julien (Vincent Macaigne), recently recovered from a nervous breakdown, Max finds a potential disaster on his hands. The band has cancelled and sent an unsuitable substitute in their place, some of his staff have not turned up and those who have are refusing to wear the renaissance costumes the groom insists on and his assistant, Adele, is having a screaming row with the lead singer, James. Within a short space of time he is also landed with an outbreak of food poisoning, an ultimatum from his lover, a suspected income tax inspector spying on the proceedings and a gormless waiter who thinks that champagne flutes are musical instruments.

But all’s well that ends well and chance, rather than planning, leads to a happy conclusion for all. “C’est la vie” is a genuinely funny film with lots of laugh-out-loud moments. Dealing with a large cast and numerous sub-plots, it deftly juggles the many strands and never drops the ball. The subtitles are at times a bit clunky and don’t always capture the nuances of the original dialogue but that’s a small complaint. With lots of heart, this is more than just a simple predictable farce, and offers a thoroughly enjoyable and satisfying outing to the cinema.