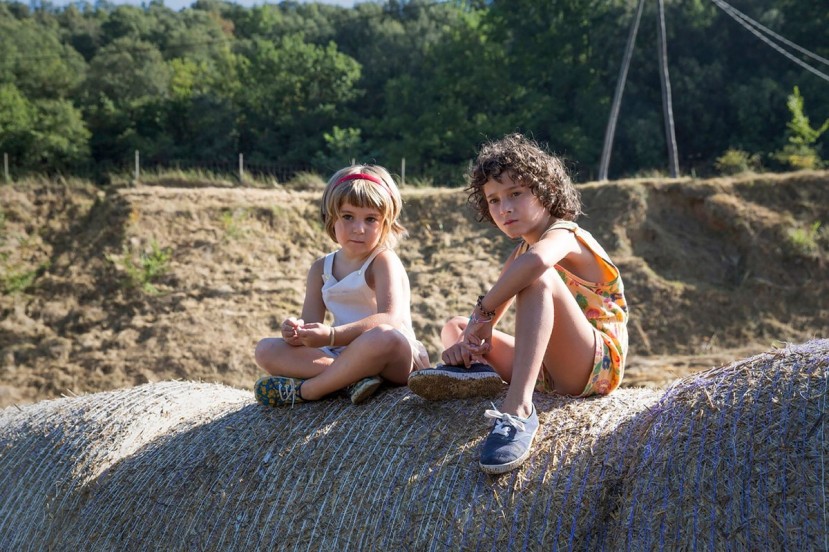 This is a film about the life of the director Carla Simón after the death of her mother from AIDS when she was six years old. Her father was already dead. They had lived in the city of Barcelona. Her mother’s family decided that Frida should live in the depths of the country with her uncle, his wife and their three year old little daughter… all very practical and sensible. It is Simón’s debut feature and it has received much acclaim on the international film festival circuit.

Frida (Lala Artigas) is the six year old whose mother has just died. Her city grandparents figure initially, probably a great deal more prominently than when her mother was alive, as the grandmother is seen teaching Frida the Lord’s prayer. But the family member she has the closest affinity with is Lola (Montse Sanze), who has a congenital physical defect. The film, however, centres on her emotions and feelings as she encounters an alien, bucolic existence with her Uncle Esteve (David Erdaguer) and his wife Marga (Bruna Cusí). They try to treat her from the start as one of their family, as if she was an elder sister for their Anna (Paula Robles). But that is easier said than done particularly as Frida’s life has been entirely city based. This is underlined when Marga asks her to get a lettuce from the garden and she returns with a fine big cabbage. Everything is strange for Frida and the various daily happenings of her new family are seen from her perspective as a six-year-old little girl. It is a picture of a relatively short period of time when Frida began her new life.

Simón tells the story from Frida’s perspective – often only the limbs of adults are in view, while the children are in full shot. She deftly creates the sense of Frida being an outsider, albeit a loved one, in this family no matter how hard Esteve and Marga seek to assimilate her into it. There is no sentimentality as a series of small incidents are related which are the apparently inconsequential happenings of children. By definition, there is, therefore, more or less no story line other than the overall one of Frida in encountering her new environment.

Simón has created an unusual film where a six-year-old child takes centre stage. It is a movie about feelings and atmosphere. Maybe its lack of a storyline is its strength. It is worth seeing but do not expect to find a film with a neat beginning, middle and end.