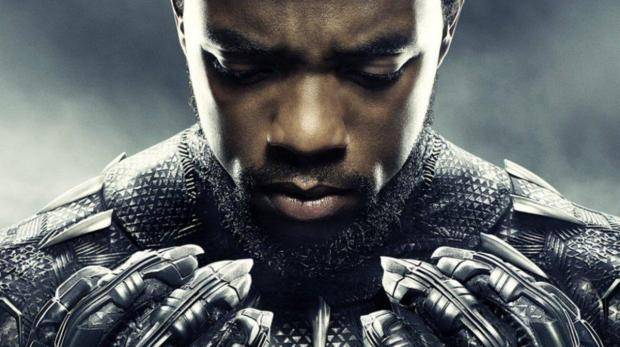 Black Panther is the latest instalment in the ever-expanding multi-million-dollar Marvel Universe. After the death of his father, T’Challa must now step up as King and ruler of Wakanda, a third world country in Africa that for centuries has been hiding a very big secret – Vibranium. This metal is the strongest on earth and has allowed the Wakandan people extraordinary technological advances meaning that while their home might appear to the rest of us as a poor farming nation it is, in fact, the most technologically advanced country on the planet. Along with protecting the secret of Vibranium the ruler of Wakanda must also take up the mantel of the Black Panther and so a new superhero is born.

The plot at first appears simple enough. Following the long standing tradition of origin stories that Marvel has been churning out over the last decade, Black Panther begins as you would expect- man inherits power, man struggles with weight of power and the responsibility it brings, bad guy shows up, all hell breaks loose. This movie, does indeed, at first tick all these boxes, yet it is not your average Marvel film and it knows it. The characters here have depth and integrity unmatched in previous superhero adventures and above all it has a huge amount of heart.

Fully aware of its diversity and grounded in its understanding that superhero movies do not usually have multicultural let alone a majority black cast, Black Panther embraces its place in history as the first of its kind and uses its diversity to lift this genre to new heights. This is helped massively by the fact that it has a cracking script that offers each of the actors their individual moments to shine. In Chadwick Boseman, as the Black Panther, we have a terrific new addition to the superhero universe and a special shout out must go to Andy Serkis, whose ability as a character actor is used to its full strength throughout. Everything in this film from costume to set to storyline feels new and exciting, a welcome transition from the tired out formula of previous superhero films.

Yet do not despair traditional Marvel fans! The pulse racing action, excellent CGI and fight sequences that you know and love are all here in abundance and better than ever. Director Ryan Coogler blends epic CGI car chases with heart-stopping one on one fight scenes that, refreshingly for once, allow the women of this movie to really shine. Black Panther will leave audiences longing for more (make sure to sit through the post-film credits to catch those famous Marvel teasers) and is a brave new addition that will inspire many a young fan.