Will it Fit in The Van – The Complex – Review

Will it Fit in The Van – The Complex – Review

The play starts with two men carrying a third into the sitting room. The unfortunate man appears to be unconscious with a pillowcase over his head. They sit him in a chair and quickly tie his arms and legs, as he comes to life and starts to fight against them. This is where the case of mistaken identity becomes apparent, they have kidnapped the local priest, Father Michael, instead of their intended target! This sets in motion a chaotic series of events, eventually leading to the bloody ending!

This is a farce that lampoons many of the changes in modern Ireland. We meet a cocaine snorting priest that seems more interested in meeting women than saving souls. There’s even an axe wielding bishop! There are drugs dealers of all sizes and shapes and they are all somehow connected in this strange world. The play owes a lot to the work of Martin McDonagh, with another bizarre insight into the world of drugs and sex in small town Ireland. There are some very funny moments in amongst the madness.

The play is set in the run down flat of one of the drug dealers. There is a sitting room with some typical student style furniture. There’s also a kitchen to one side of the stage with broken down walls allowing us to see what is going on inside. It is a surprisingly big and well worked set for this small production.

This is the third play by writer Conor Clancy and it is still early in his career. There is a big cast, with six actors on stage at various times. The story moves in many directions and always keeps you on your toes. Some of the actors are a little young and clean cut for the roles they play but despite this they put great passion into their parts, making the most of the madcap events. The play is not the finished article but shows promise in many areas. A young theatre troupe with lofty ambitions.

Will It Fit In The Van? – by Conor Clancy 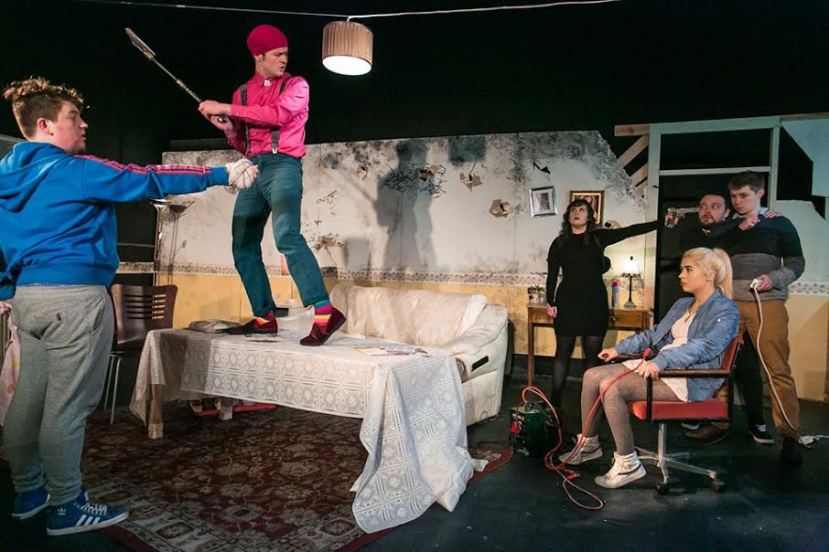