The stage is stripped back to its three walls with a tarpaulin draped like a half hung mast prominent towards the back of the stage. There are small bundles of cloth erratically placed on the floor. In the gloom, four figures can be discerned sitting along the sides. They are John Carty, Barry Cullen, Brian F. Devaney and Sandra O’Malley. They are attired in the rough clothes of fishermen in the early years of the 20th century.

The director is Niall Henry, who trained with Marcel Marceau whose name is synonymous with mime. Each of the cast members either trained in the intricacies of mime or through practice has an intimate awareness of the uses of mime in the creation of theatre. The play begins with the famous advertisement projected onto the tarpaulin. It reads: 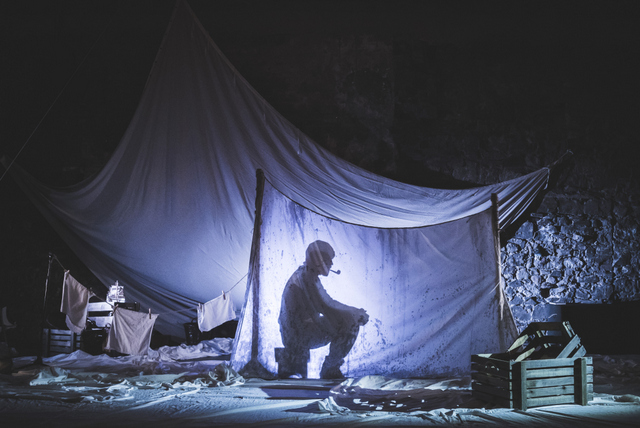 There has been considerable research as to whether the advertisement was in fact ever placed. It would seem probably not. Nevertheless it makes a fine dramatic preface as to what is to be revealed in front of the audience in the ensuing sixty minutes.

The cast unfold a number of white cloth bundles to create a perishingly cold world of ice bergs and frozen waters which Shackleton’s expedition faced in the Wendell Sea. Scaled models are used tellingly, in particular that of his ship the “Endurance”. It slowly moves from the relatively free flowing oceanic waters to the increasingly ice bound waters surrounding Antartica to a point where it cannot move as the ice overwhelms it. This developing sense of overpowerment is enhanced by a haunting musical score which contains erratic bangs and cracks as nature encircles and entraps its alien prey. It is hauntingly beautiful. The harsh score is occasionally interspersed with more familiar music as when the four actors sing, in muted voice, an excerpt from the carol “God rest ye merry gentlemen”, and an old recording, somewhat muffled, of John McCormack singing “The Wearing of the Green”. It all added patina and historical perspective to the spectacle of the harsh world being depicted. The most haunting vision is the trudge through the vast wastelands of snow and ice where the mime skills of the cast create a grim agony of the long, arduous trek.

As the entire piece strives to create such a high degree of excellence perhaps a couple of quibbles are in order.  It is unlikely that people at the back of the theatre were able to see the relatively small model camp which is placed at the very front of the stage. Secondly towards the end there is a short, historical explanation relating to the expedition projected onto the tarpaulin but partially hidden by a prop even when watched from a seat in the centre of the first row.

This is a production created with love and respect to those who had the need to explore in their blood. Without spoken words the work creates an insight into man’s bravery against the elements. It is a fitting act of homage to Shackleton and his courageous team.