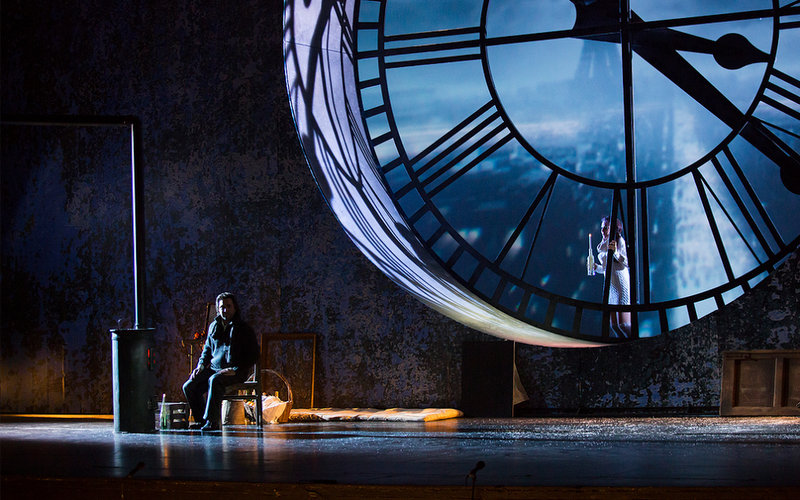 There is much to admire and a lot to enjoy in The Novaya Opera Theatre’s production of La Bohème: excellent singing, a fine orchestra, a set and costume design that are breathtakingly beautiful. One of opera’s “greatest hits” with beautiful aria heaped upon beautiful duet, the piece is set in the Latin Quarter of Paris, teeming with artists and would-be writers and philosophers, all striving for artistic expression or intellectual recognition, all struggling to survive. Into this exciting, if impoverished, world of warm hearts and louche communal living walks the poor seamstress, Mimi, unfortunately seeking love, stability and commitment. She is in the wrong place.

If on opening night there were a few minor technical problems with lighting and an occasional timing wobble between singers and orchestra, this was no doubt due to lack of adequate rehearsal time and will have been ironed out in later performances. In any case these are just momentary distractions; a more serious concern is director Georgy Isaakyan’s shaping of the piece.

In a director’s foreword, Isaakyan tells us that he is “not interested at all in interpreting Puccini’s opera as it is usually done”. Fair enough; blowing the cobwebs off an old favourite can be refreshing and stimulating, offering something extra by way of insight and interest. Oliver Mears’s wonderful 2015 production of Handel’s Agrippina springs to mind. Isaakyan’s dismisses “usual operatic rubbish”, declares that “this version reflects my inner musings and . . . disputes with myself”. The problem is that his disputes and musings do not connect with Puccini’s music. It is the old problem of reading something into a text rather than reading something out of it. The end effect is that the director’s approach distances the piece from connecting emotionally with the audience. There is little individual characterisation or empathy between characters, so that their relationships fail to engage us as they sing about love, loss, betrayal, illness and death. The central love story between Mimi and Rodolfo lacks not just any hint of passion but even a sign of mutual affection, so that as Celine Byrne and Aleksey Tatarintsev sing their hearts out, with hugely symbolic sets looming over them, we are distinctly unmoved. However much this is rationalised or explained away in a foreword it takes from, rather than enhances or illuminates, Puccini’s music.  The contradiction between text and direction increases as the evening progresses so that by the final act, when ear rings and an overcoat are pawned to buy cordial and a muff to keep the dying Mimi warm, we are looking in on an ultra-chic contemporary art gallery with all the signs of privilege and affluence. Isaakyan’s musings have remained stubbornly his and get in the way of the music.

Ekaterina Mironycheva’s Musetta, almost alone among the performers, convinces as a three-dimensional character. As Colline, Vitaly Evanov’s rich bass was impressive throughout and given full rein in his Act lV aria. Tatarintsev’s Rodolfo sings beautifully with occasional moments that break through the imposed directorial constraints and are properly affecting. Artyom Garnov as Schaunard and Andrey Breus as Marcello complete a fine cast. Not surprisingly, Celine Byrne is the star of the show and her singing especially in Act lll is superb. Those who saw her previous Dublin performances, including her NCH concert with Josef Calleja, know what a fine actress she can be and how easily she connects with an audience if directed accordingly. Not surprisingly, her curtain call appearance brings the audience to their feet at the end of an evening of great music.

If presented as a concert performance, this would be a wonderful performance, beautiful music and a cast of terrific singers supported by a fine orchestra. Despite serious misgivings about the director’s approach, it is a fine evening’s music. It continues, with some cast changes, until Sunday (December 4th).