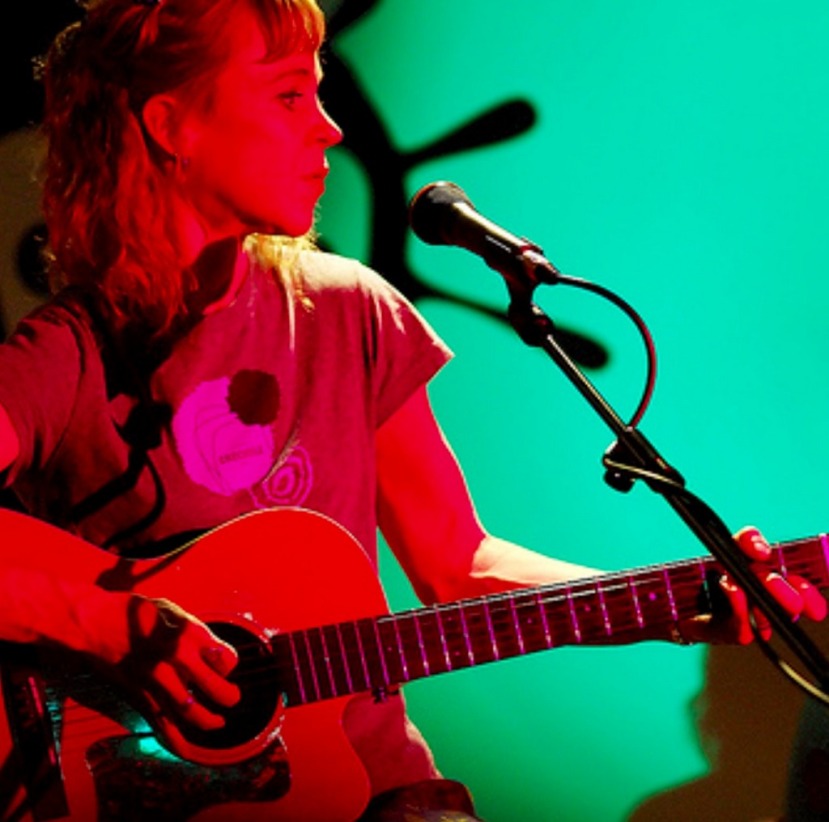 Ostensibly ‘An Evening with Kristin Hersh’ is a showcase for her new release, the mammoth 24-track, 2 CD plus accompanying book, Wyatt at the Coyote Palace. It’s a fascinating album, which more than ever gives listeners a glimpse at the, apparently, haunting way music arrives to the artist since she sustained a double concussion when knocked off her bike at 16-years old. The music is beautiful – Hersh plays every note – and the opening one-two punch of ‘Bright’ and ‘Bubble Net’ are some of the sweetest sounding bitter pills she has released in recent years. However, throughout the album, the sweetness is often offset, not only by a coal black vein of deeply personal lyrics, but by squalling atonal guitars, scraping metallic intrusions and atmospheric field recordings.

If the tracks from Wyatt… were all we were to hear tonight, the evening would have already been a resounding success. Instead, the quietly seated and rapt audience are treated to a wonderful career retrospective from one of indie-rock’s most enduring talents, with selections made from across her extensive solo career and time as head of the beloved Throwing Muses.

The set-up is simple; two electric guitars (though only one will be used), a single microphone, a low chair and a few copies of Hersh’s books scattered beside her; Wyatt at the Coyote Palace, Don’t Suck, Don’t Die: Giving Up Vic Chesnutt and Purgatory/Paradise. There will be none of the extra instrumentation and sound effects that colour Wyatt, just her unmistakable voice, forceful yet delicate guitar playing and a little bit of tastefully manipulated reverb.

‘Bright’ from Wyatt, which opens the show; and ‘Mississippi Kite’ and ‘Krait’ from 2010’s Crooked are early highlights. ‘Krait’ especially shows off a powerful voice that easily turns from an icy breeze of a broken and sweet near-whisper, to a full throated and shredded yell. The voice may be older, and that much huskier, but it still packs a punch when it’s needed to. And, stripped of the added instrumentation that marks those albums, Hersh’s performance is even more intimate and engaging.

Yet, it is the readings that will give a little extra colour to the songs this evening; providing context and commentary on music that many in the audience are intimately familiar with. Framing Throwing Muses ‘City Of The Dead’ are intricately detailed tour-stories of having to take apart and ruin a distortion pedal to prove to the customs officers at an airport that it is not a bomb; and a story about a shared hotel room where a swarm of insects three inches deep ominously swirl the ceiling. Hersh’s reading voice is steady and measured and the simple set-up and spoken word passages draw attention to the deft eye for detail that also fills her songwriting. From the starkly confessional, to the darkly hilarious; Hersh has a way with words that is deserving of a theatre stage, and that can devastate just as easily as it can illicit belly laughs from the gathered faithful.

‘Sno Cat’ from 2003’s The Grotto, a personal highlight, is a perfect example of Hersh’s writing and songwriting juxtaposed in such a way that they alter and affect each other. On record and in performance ’Sno Cat’ is a sparse, finger-picked acoustic number that sounds melancholy and lonely, the story of a woozy, wintery night. The Raymond Carver-esque story Hersh reads before it is, on the other hand, laugh out loud funny, and it’s hard to tell whether this dispels the tension of the song that follows, or adds to it. After telling us that this is a song about a fight, “Which is bullshit when the person you’re fighting with is not a song writer – I get the last word over and over again,” she reads a passage about how she dramatically ran out of the house in her bare feet during a fight one winter’s night. Hersh drives angrily though her neighbourhood until she encounters a man on a sno-mobile doing donuts on his front lawn, in the process destroying the plastic reindeer that get in his way. She wonders has he also just dramatically run out from some fight, only to have grabbed the wrong set of keys – but at least he has his shoes. This information doesn’t make the song ‘Sno Cat’ any less poignant or sadly beautiful; rather it shows how laser guided Hersh’s focus on detail is, that she can make two separate, entirely different and equally affecting pieces of art out of the one incident.

Alongside a tribute to her friend, the late Vic Chesnutt, on his own ‘Bakersfield’, a spine-tingling rendition of perhaps the song she is most known for, ‘Your Ghost’, and a recipe for “Detox Hooker Gazpacho” (!), there were many, many highlights at An Evening with Kristin Hersh and a beaming crowd filed out feeling very lucky to have been there. Let’s hope it’s not long before Kristin comes back our way again.