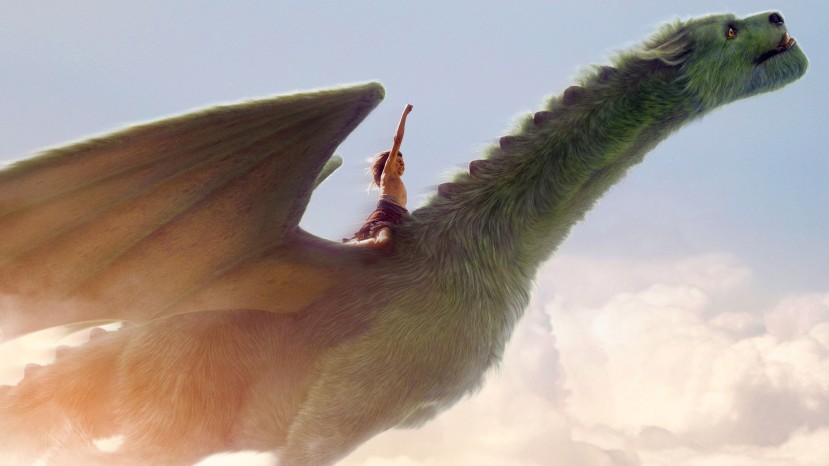 If the title of this movie sounds familiar that’s because it’s a remake of a much loved 1977 classic. However where that was a musical set in the early 1900s this offering does away with the singing and dancing and updates the action to a contemporary setting.

Following a tragic accident young Pete (Fegley) finds himself alone in a forest where he stumbles upon a dragon. Initially fearing he will be eaten his new acquaintance turns out to be friendly and he names him Elliott. The pair quickly bond and live together undisturbed in the forest for several years until Pete is eventually discovered by a Park Ranger called Grace (Howard). Brought home to stay with her and her fiancé Jack (Bentley) and his young daughter, Pete is distraught at being taken from his home and friend and does his best to get back to Elliott. Although they are initially sceptical Grace and her family agree to help him. However Jack’s brother Gavin (Urban) has also seen Pete’s secret friend and is determined to capture Elliott and show him off to the world.

While this is essentially a kids/family film it is very ambitious. There are lots of big dramatic scenes and some very dark moments. If you’ve seen the original you’ll know that Elliott was animated but here he is CGI’d and they have done a wonderful job of creating a character that you truly engage with. Fegley is completely endearing as Pete and does a wonderful job – especially when you consider he was probably often acting to thin air in order to accommodate the CGI.

The grown up cast don’t have the most challenging roles – they are basically there to prop up the story – but they all do a good job although Karl Urban veers the wrong side of panto villain at times. However the breathtaking scenery and wonderful scenes with Elliott more than make up for that. The cinematography is stunning and even without the added intrigue of a dragon it would make for engaging viewing.

These films are designed to leave you with the warm fuzzies and this definitely ticks that box. Yes, there are plot holes. Yes, the script is a bit contrived at times. This can be overlooked however as it shamelessly tugs at your heartstrings. This doesn’t cater to the grown ups with layered meanings and jokes which means that you may need to borrow a little one to go and see it but it is worth it. Not flawless but lovely nonetheless, this is the kind of film that will bring out your inner child.