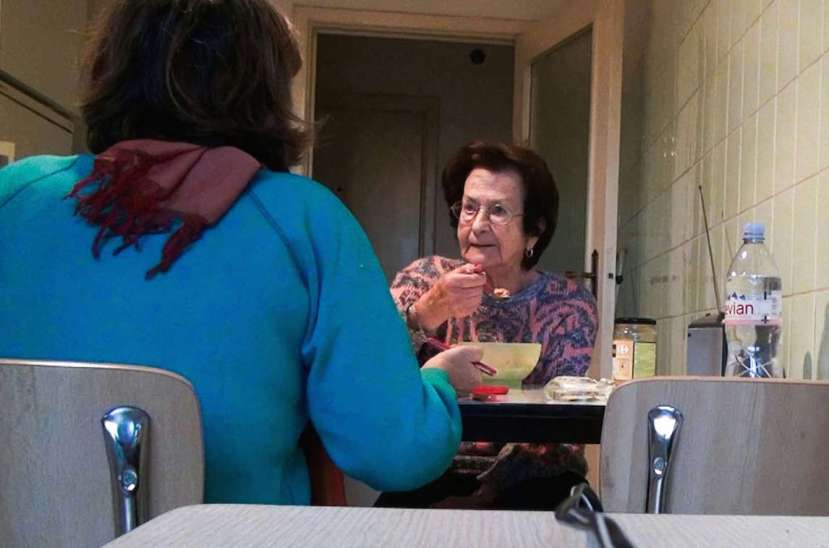 The film begins with dessicated looking leaves clinging to a tree being buffeted by a strong wind in an arid landscape, probably a desert. It is a sequence which lasts what seems an interminable length of time but is apparently about four minutes in duration. During the film there are subsequently long sequences of travelling through a parched landscape. Neither location is ever identified. What is identified is the comfortable, bourgeois Brussels apartment which Akerman’s mother of Polish, Jewish origin occupies with a house keeper as the grim reaper encircles her. She is someone who has faced death in far less comfortable surroundings having been a survivor of Auschwitz. She is an old lady who is entitled to respect as she deals with the daily humiliations of old age.

Akerman is herself in the United States for much of the film and there is a long skype sequence of the two women having a discussion which makes the viewer somewhat uncomfortable because the content is a loving one between a mother and daughter but it is domestic, mundane and often trivial. It is so gently intimate it should perhaps not be heard by outsiders. It makes the viewer seem like an eavesdropper.

There are long static sequences of what appears to be a generous vestibule in the apartment with suitably dull furniture. There is little to arrest the eye other than almost hidden on top of a cupboard, a sculpture of a couple of heads in a modernist style. It looks to be of interest but it is difficult to know as it is barely in view. Perhaps these sequences represent the monotony of the mother’s declining days. However it is impossible to know as little is explained. The liveliest part of the film is when the mother describes her father who seems to have been a charming father to his two little girls.

The film lasts just under two hours. There are quite long periods when boredom is difficult to stave off but perhaps the symbolism within the film is the ability of the mother to survive the horrors of her life in Auschwitz (the buffeted tree) and for a long time the dullness of her old age in the comfortable Brussels apartment. The viewer will have to make the decisions as Akerman plays her cards very closely to her chest and little is explicit.