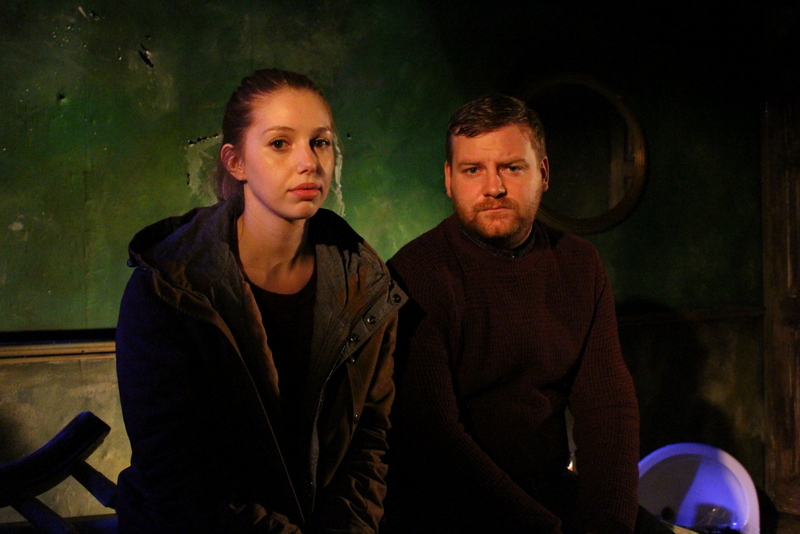 Many of us will have experienced a New Year’s Eve when retreating to upstairs with a bottle of wine seems more appealing than the ‘organised fun’ of a house party; and in ‘From Eden’ the characters do just that. Both retreating to a (yet to be renovated) upstairs bathroom, Alan (Stephen Jones, who also wrote the show) and Eva (Seána Kerslake) find themselves thrown together through their wish to be alone. At first struggling to understand each other, it soon becomes clear they have more in common than a wish for solitude; and maybe everyone has their own secrets.

Coming to Bewley’s Café Theatre in the Powerscourt Townhouse after a wildly successful run in Theatre Upstairs last year; ‘From Eden’ blurs the lines between dark comedy, and drama. The background hum of the party below may be ever present, but the blurred party classics add atmosphere, without providing distraction. Despite a dense script which tackles some difficult topics; the play is refreshingly conversational in tone, and entertaining to the end. While engagingly natural in tone, there are some one liners which will stick in the brain long after.

Jones and Kerslake have brilliant chemistry as the pair who are unafraid to go toe to toe with each other; with an enticing back and fourth of energy that draws the audience right into the world of the characters. Karl Sheils’s direction seamlessly makes the most of the confined, but evocatively designed set; the strength of which could be summed up by a beautifully tender and difficult moment, where the audience can only see Eva’s face through a mirror, as she finally attempts to share what has long been withheld.

Often a preceding reputation can damage the impact of a returning show; but in this case a new, or returning audience, will not be disappointed. ‘From Eden’ may have a short running time, but the impact of it will remain long after.