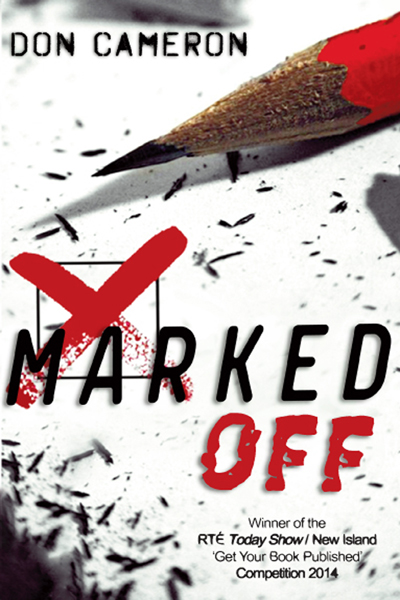 Don Cameron’s Marked Off is a well-paced, debut thriller. Set in and around Dublin and the suburbia that is Booterstown and its environs in particular, it concerns Ireland’s first serial killer and the race to catch that killer. The setting helps create an eerie sense of creepiness by making the familiar uncanny. This is only exacerbated by the interspersed thoughts of a second narrator – the killer.

Inspector Danny O’Neil is the likeable gumshoe on the case. The other Gardaí on show try not to identify themselves with “CSI” tendencies and situate their work practices more in the old fashioned school of hard-detective work. O’Neil takes the best of both worlds. He is modern Garda. He even works with the Garda’s first female profiler trained in America and his girlfriend is a forensic pathologist. He runs on Sandymount strand. There is a murder board.

Still Marker Off isn’t True Detective, but if it was, O’Neil is slightly more the Woody Harreleson type than the Mathew McConaughey type. In fact the charm of book is its well-understood context, namely Ireland. The detectives denude the mores of classes, milieus and social groups and the foul sense of corruption helps heighten the noir feel.

Most aspects of Irish life are touched upon; business, politics, golf, begrudgery, tax and, of course, drinking. The two more senior journalists in the book are obese alcoholics. This is also where we find a well-constructed subplot about the press and their role in shaping our views about crime and murder and also the hysteria that they can create with cases like this.

There are several nods to the genre, some subtle, others less so.  O’Neil is haunted by the death of his wife which feels more stereotypical than tragic, despite Danny’s lamentations. Broken men get results it seems, as he is constantly referred to as the best man to do the job.

However the dénouement doesn’t disappoint and reader will hope for the return of Inspector Danny O’Neil.  The clues, breaks and red herrings all come naturally. The book is a well-written, easy read – a decent thriller.

Don Cameron is the ‘Get your book published 2014’ winner. The competition was run by New Island and in association with the Today Show. He has had over 40 stories published and writes the ‘Don’s Dublin’ column in the Dublin Gazette. You can read a nice profile of the author and the book here.