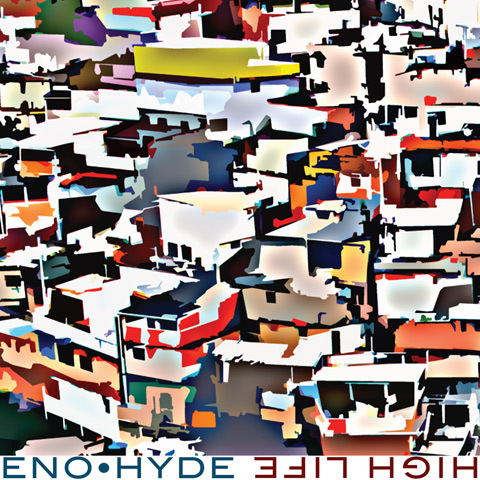 10. Owen Pallet – In Conflict – Album Review
–
“This is Owen Pallet’s fourth album, and possibly his most complex and assured. The downside of this is that it is not as accessible as what went before. While it may take a bit more work to enjoy the sound, it’s worth the effort.”
–
–
9. Eno & Hyde – High Life – Album Review
–
“This album is a collection of guitar based grooves, which at their best are stunning. There’s some filler in there also obviously, a few tracks that barely raise their head above water. Yes, I’m talking to you ‘Moulded World’. It wasn’t a moment of genius on their part, but with four songs on the album over 7 minutes, they’ve certainly given each of the songs room to breathe. It’s an album with elements of African music, and is reminiscent of Eno’s work with David Byrne. See what you think of the song ‘Lilac’ below, and if you don’t feel like hugging people at the end of the euphoric 9 minutes of music, you’re a stronger person than me!”
–
–
8. Damien Jurado – Brothers and Sisters of the Eternal Son
–
It’s a warm, rich sound and an interesting development for someone I would associate with less tricks and gimmicks. His standard approach is that of unadorned songs, drawing you into his lyrics and feeding off his delicate vocals and guitar playing. Still, it’s a positive that he is embracing change and doing something different, I’d only be complaining if he did otherwise!
–
–
7. Caribou – Our Love
–
What Dan Snaith did this year was quite lovely, but would we expect anything else from the man? Only his fourth album as Caribou, and really this album was all you would have wanted. It is slow and sophisticated dance music that washes over you.
–
–
6. tUnE-yArDs – Nikki Nack
The only surprise with this album was that it wasn’t higher on the list!
–
“The worst you could say about this new release is that it’s more accessible than what went before it, but it’s not the worst complaint. I can’t see myself listening to much else over the next while, as I explore the complex arrangements of this new gem. Merill, thanks for not being the Phantom Menace.”
–
–
Numbers 5-1 coming soon…