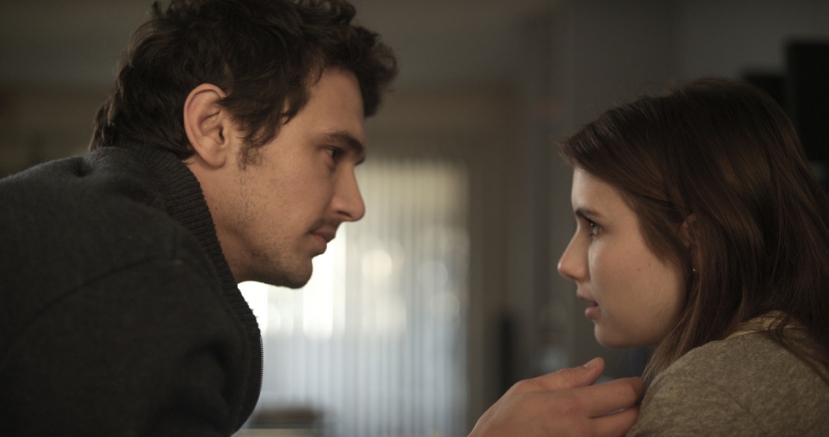 Directed by Gia Coppola (granddaughter of Francis and niece of Sofia), Palo Alto spins a narrative of sorts out of a collection of short stories by James Franco (who also appears and co-produces). Honing in on a handful of disaffected teenagers in the eponymous Californian region, Palo Alto orbits loosely around the tentative romance between Teddy (Jack Kilmer, son of Val) and April (Emma Roberts, daughter of Eric and niece of Julia). In addition to the usual suburban ennui, further wrinkles arise in the form of Teddy’s sociopathic friend Fred (Nat Wolff) and April’s ill-advised affair with her soccer coach (Franco, capitalising on his aptitude for smarm). There are shades of Coppola Sr.’s Rumble Fish (1983) here, but Palo Alto’s low-key dreaminess has much more in common with Sofia’s early films, particularly The Virgin Suicides (1997) – the poster for which is conspicuously hung on April’s wall.

Another prominent influence is Larry Clarke, whose two collaborations with Harmony Korine (1995’s notorious Kids and 2002’s seldom-seen Ken Park) are echoed in the sexual frankness and occasional bursts of violence with which Coppola tempers her film’s dreamy atmosphere. The melancholic score, by Robert Schwartzman and Devonté Hynes (Blood Orange) evokes another era of the teen film, with synth pads, Linn drums and emotive vocals that hark back to the eighties. The weight of these influences means Palo Alto struggles to assert its own identity, a problem not helped by the fact that it seems curiously non-specific in terms of time and location. While the characters use contemporary technology, their slang, attire, and decorating choices are all evocative of the nineties – either an accurate representation of the ever-narrowing cycles of youth culture, or a backward glance at Coppola and Franco’s own formative years. Moreover, despite the title, there is very little in Palo Alto the film that seems particular to Palo Alto the place, and Coppola risks sliding into the common pitfall of mistaking white West Coast suburban disaffection for a universal state, rather than as something peculiar to a very specific bracket of American society.

Although it never feels fresh, the film does often feel true – and it owes this to the strong performances Coppola draws from her leads. As Teddy, Kilmer recalls the murmured introspection of the young River Phoenix, a comparison that lends weight to a fireside confessional that can’t help but recall the indelible campfire scene in My Own Private Idaho (1991). The undisputed star though is Roberts, whose soulful turn as April lends the film almost all of its depth. Like Scarlett Johansson and Kirsten Dunst, both of whom turned in career-making performances for Coppola’s aunt, Roberts expertly captures a character hovering anxiously on the threshold of adulthood.

Coppola and Roberts’ affinity makes April’s frustration and boredom compelling to watch, a tricky manoeuvre that has escaped Sofia in her more recent films. Unfortunately, Nat Wolff’s turn as the thinly drawn Fred grates throughout. This time it’s Franco’s debt of influence that shows through, as the borderline sociopathic Fred seems to have strayed in from an early Bret Easton Ellis novel. Furthermore, nobody who’s paid the slightest attention to Franco’s half-baked dabbling in visual and performance art will be surprised when Fred delivers a supposedly revelatory monologue on homosexuality, apparently apropos of nothing. Franco’s attention-seeking gay tourism has been irritating since long before its apotheosis with his 2013 drama/documentary/thingamabob “Interior. Leather Bar”, and it feels typically undercooked here.

These misgivings aside, Palo Alto is an appealing film, carried by Coppola’s evident feel for her characters, and Roberts star turn. Hopefully Coppola’s next outing will see her empathy and perception tethered to fresher material.