The Madman and the Nun – Smock Alley Theatre – Review

A young man is asleep in an asylum cell, heavily dosed with Morphine. He is visited by a Nun, who takes pity on him and spends time by his bed side. When she discovers he is a famous poet, she is reminded of her life before she entered the convent. There is a spark between the two, which is set alight in unexpected circumstances.

This play was written by Stanisław Ignacy Witkiewicz (or Witkacy as he was known) in 1923.  He has been described as a Polish Beckett and explored theatre of the absurd long before the better known exponents such as Ionesco and Genet. While there are comparisons between this work and Beckett, it falls closer to Ionesco with the Lesson coming to mind.

The storyline shifts constantly, and leaves the viewer on unsecure footing. As soon as you think you know the direction the play is going, it abruptly pulls away and follows another path. There is something quite captivating about the work, despite the general level of madness it contains, and it does not leave the audience cold despite its unorthodox nature.

The name of the play would make you think it was a two hander, but there was actually seven actors on stage in this production, and all have speaking parts. We get to meet the various Doctors (X and Y), Interns and the Mother Superior, who all visit the madman in his cell. The staging is simple with a hospital bed the main piece of furniture on stage. There is also a wardrobe in one corner, and the actors enter and exit through it. There are some impressive projections onto the back wall of the set, showing the insides of clocks and other elements of the plot.

Work such as this demands a strong cast, and this young collection of actors deliver well. Shane Robinson plays the difficult and physically demanding role of the madman with style. He is required to perform in a straight jacket for large sections of the story, and he moves well despite these restrictions. There is good chemistry between Shane and Niamh Large who plays the role of the unconventional Nun.

The story is non-linear and often moves in unexpected directions. It carries a sort of dream logic to it, which will frustrate any viewer looking for a traditional night at the theatre. The audience have to be open to this type of work and know what to expect. The piece brings to you the edge of sanity and it’s a fascinating place to visit.

The Madman and the Nun – Smock Alley 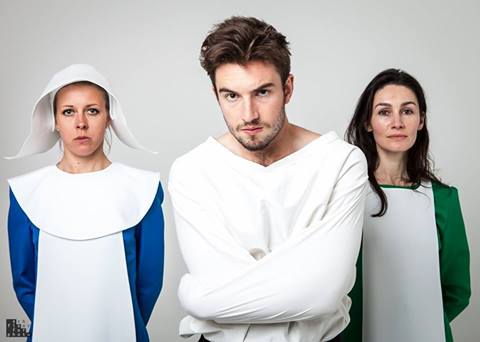