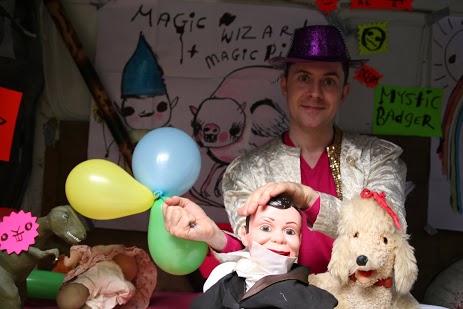 After a successful outing during the Collaborations Festival in early March; Creepy Jimmy, the first play by Tiny Little Gods productions, now comes to Chancery Lane Theatre. I caught up with creators Aaron and Sarah Lennon Ross, to discuss their first foray into theatre, reigning in Jimmy’s creative talents, and the powers of a TKMaxx underground carpark.

So tell me a bit about Creepy Jimmy:

Aaron: There’s a sheltered late-thirties guy who’s been living with his parents his whole life. The parents die, and he doesn’t know what to do with himself; so he figures the best thing is to pursue all his great business ideas, such as the children’s playtime van, and the skeleton museum.

Where did the idea for Jimmy come from?

A: At the risk of sounding mental, it came in first as a voice: His weird little northern twang, talking about how much he likes toenails. He was a little bit older and creepier. Then as we went on, we were like: ‘This is going to be really annoying.’ So that’s when it got lighter and a bit younger.

Sarah: It’s from your drawings as well…

A: (With) Tiny Little Gods, I found that a lot of them were starting to be drawn in character: It could be a letter being written to the taxman, or the pope, or whatever, from a naive perspective. Then we went to ‘Collaborations’ a year ago and saw some really fun shows, and were like: ‘You know what? Tiny Little Gods with a comedic theatre approach could really work.’ At that time Creepy Jimmy had started as a piece of writing, but it was only then that we thought, actually, Theatre’s a really good way to get it out.

How was the first performance in front of a live audience?

A: That fine line between really exciting and really scary! Amazing how different the reactions were; depending on the size of the crowd, or who was there. We leave room for improvisation as well; so the script is all learned, but depending on the mood of the night, if something’s working you might milk it a little bit, if it’s not you gloss over a bit. It was never really intended to be comedy in the beginning, but it just moved that way: we have the most fun when we’re laughing during rehearsals.

And how about the writing process?

A: In the writing there are two stages. Generally I’ll get a broad sense of an idea, and get it down in a quick shabby way, then we’ll talk it out; Or Sarah will film me and ask Jimmy questions about that scene, and I’ll respond in character. And that’s always better than what came in originally…

S: Then we usually go with the natural stuff! And Aaron does a lot of the music for it in the TKMaxx underground car-park. That’s his little spot for getting work done, because it’s so boring and dark and quiet; so he just goes in the car with the iPhone. I usually go off and do a little shop, then come back and he plays me the song he’s been working on.

How’s it been working together on Creepy Jimmy?

A: Well we’ve worked together for years. We first started when I was doing textile design for fashion, and Sarah would be coming over saying: ‘What if you tweaked that, or what if you changed this’, and she’d always make it better. Then we started having exhibitions together and we’d work on the same canvasses and pass them back and forth. So when it came to writing and performance based things, it seemed natural.

And Sarah, do you then have to put a director hat on and separate yourself?

S: I do go into director mode.

A: Oh you definitely do; it’s like a character nearly. Sarah’s like Simon Cowell: she’ll get behind her desk, get all her notes and her laptop, and it’s all business.

S: And I record it all so I can reference back to him.

A: We film almost everything when we’re doing proper rehearsals, so it’s quicker for Sarah to explain to me what’s working and what’s not, because otherwise it can be quite subtle to explain.

With a character like Jimmy, are there any ideas you’ve come up with that have been too far?

S: Yeah he really has been censored heavily! We crossed the line and ran far into the distance!

A: There are bits that I thought: ‘Will people understand that it’s Jimmy being offensive? Or will the play just seem offensive?’ I was trying to get that distinction and not push it so far that it’s distasteful.

S: It has gone a bit worse than in Collaborations; we’ve been encouraged by some of our naughtier friends to go that way, getting us to push the boundaries. But when you’re listening to the character for so long you kind of get used to his level…

A: We’ve desensitized ourselves to it; but I think Jimmy gets away with a lot because of his innocence. Nothing is meant to be malevolent.

And do you think you’ll go on to do more Theatre projects?

A: Yeah! It’s kind of sparked a load of other theatre ideas along the way that we’ve taken note of.

S: We’re looking at podcasts next I think with David Fennelly. He’s hilarious, so that would be a nice little … something fresh. We have one viral we’re working on at the minute for Creepy Jimmy, and all (the ideas are) kind of feeding into each other, so it’s Jimmy interviewing a dead bird, and he’s asking about heaven, and what religion is the bird …

A: We just found a dead bird one day, and it was really beautiful, and we were like: Perfect! Why would I interview a person, when I could interview a dead bird?!

Creepy Jimmy runs from the 26th – 31st May in Chancery Lane Theatre, at 6.30pm. Tickets are available from www.chancerylane.ie.

You can get a glimpse into Jimmy’s world with JIMMY’S WORST BUSINESS IDEA? and ‘CONVERSATIONS WITH JIMMY’.