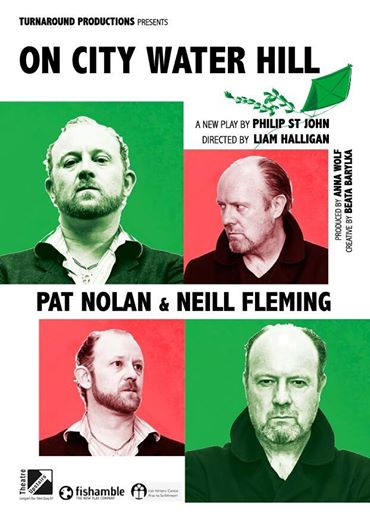 For his third play, St. John opts for a two hander using two men who arrange to meet at a remote, mountainous location in the vicinity of Dublin. Frank (Pat Nolan) needs the specialist services of Gary (Neil Fleming) following the break up of his marriage by a 6ft 3in lawyer from Jamaica. Even though the piece is just under an hour in duration there are three specific acts as the story spreads out over a period of time.

The specialist services which Gary can arrange are not for those who believe in the rule of law… think serious organised crime. However Frank wants his victim to survive in order to suffer, so he has worked out a refinement about which even Gary (“I am a stranger to scruples”) has initial doubts. His momentary uncertainty place Frank in the ascendant in the power play between them.

St John has the ability to create some appropriate phrases in the dialogue such as “chronic emotional illiteracy” and uses a mundane, simple final sentence to provide an effective end, leaving the audience in no doubt as to what will occur when the lights go out.

After a somewhat shaky start, the play settled into a grim power exchange between the two men as each of their own certainties waxed and waned. However the man of experience, Gary, is the one who understands the world; he is contemplative, he reads. Frank’s foundations, even if he has enjoyed a certain amount of transitory commercial success as a film producer, are less knowing, less sure footed. He is an innocent abroad.

St John has created a well-crafted play about the dark world of criminal contracts which kept me, I cannot say happily occupied given the subject matter, engaged in a world which is beyond my ken even though our news contains much evidence that it is alive and well and living in Dublin.