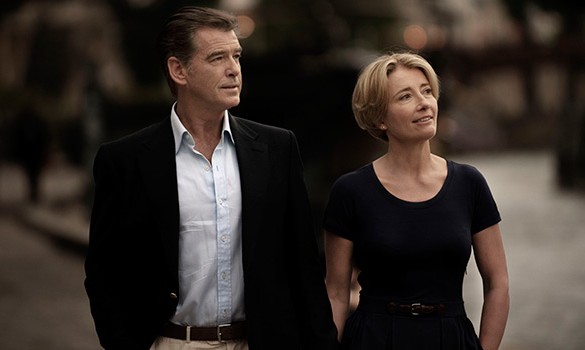 ‘The Love Punch’ may well be the most placid jewel-heist film you’ll ever see. It tells the story of Ex-Husband and Wife Richard (Pierce Brosnan) and Kate (Emma Thompson), who begrudgingly join forces to rescue their retirement fund, after Richard’s firm is defrauded and sent into receivership by a dodgy French financier, days before Richard is due to retire. Queue all sorts of unlikely shenanigans; as the (non) couple head to France, and plot to get revenge by stealing a $10 million Diamond recently purchased by the financier for his bride-to-be.

Although there are funny moments throughout, such as the sight of these master villains (joined by the equally unthreatening Celia Imrie and Timothy Spall) wading into the sea in matching black scuba gear; this attempt at a screwball comedy never quite has the energy to become truly exciting.

Emma Thompson is always watchable, and the stellar cast are not afraid to have fun and make fools of themselves; but they’re rarely pushed far out of their comfort zones. Despite the far-fetched plot, which moves from suburban England to kidnap and robbery in the French Riviera with barely time for an afternoon nap, the outcome is always predictable; and there is little justification behind many of the gags (why on earth would a bridal suite be full of cats?!)

With its golf ranges, prostate jokes, and holiday feel; this film is very firmly aimed at the middle-aged and middle-class. The central characters may have lost their nest-egg of savings, but they still look comfortable, and there’s not much sense of danger: They might just have to sell one of their cars. If you’re looking for a gentle comedy that won’t raise the blood pressure too much, then this one’s for you: ‘The Love Punch’ may be nice to take your Mum to on Sunday, but it’s unlikely to become an instant classic.