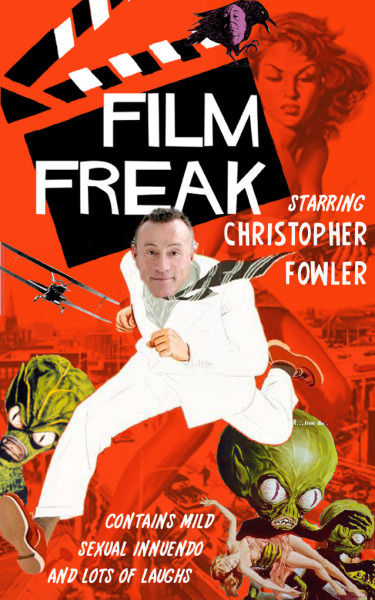 Like many readers I came to Christopher Fowler after seeing the rather arresting cover of Spanky in the horror section of a bookshop in the nineties. The cover image, which depicted a PVC clad male angel/demon, could easily have been used as the poster for a fetish nightclub, it certainly prompted me to pick up the book and start reading. Three things were immediately clear: one, this was not an S&M tome, two, this man could write and three, he certainly knew how to promote a product. The last two come together in his memoir Film Freak, the extremely entertaining follow up to Paperboy, a lovely account of his childhood in fifties England. Film Freak follows Fowler through the sixties (the swinging part of which he largely missed out on, and frankly didn’t sound quite as glamorous as one would think), seventies, eighties and nineties, through careers as a copywriter, hopeful screenwriter and ultimately head of a successful film promotion company in Soho and, of course, writer (with a brief spell as a nightclub owner at the height of disco!). As all of the book’s promotional material will tell you, Fowler came up with the famous Alien tagline “In space no one can hear you scream” but he also came up with the tagline for the marvellous sounding Miguel Ferrer film The Harvest – “Charlie’s living his movie script. The good parts. The sexy parts. The body parts.”

Fowler loved film from the outset, and as a shy teenager spent most of his nights in the local cinema, watching anything from European arthouse to the schlockiest of horrors. This love endured and he describes watching double bills of Don’t Look Now and The Wickerman in crummy cinemas “not so much fleapits as armpits” and working on wonderfully bad films with titles like Inseminoid and Where is Parsifal? (a comedy with Orson Welles!). He tells of the heyday of Wardour Street in Soho, where film companies plied their trade and where he worked his way up, eventually becoming disenfranchised with his various employers and setting up his own company the Creative Partnership with his colleague Jim Sturgeon. He describes how in the later days of exploitation they became disillusioned with the sleazy, sensationalist direction films had moved in and made a conscious decision only to “work on films that had no racism, no sexism, no homphophobia. It felt like signing our death warrant”. It turned out to be the key to their success and they ended up working with directors such as Peter Greenaway, Mike Leigh and Ken Loach at a boom time for British film. We hear anecdotes of time spent with Kenneth Williams (delightful), Joan Plowright (terrifying) and sadly only the briefest mention of an evening getting drunk in a hotel room with Melanie Griffith and Jamie Lee Curtis (now that is the eighties for you). He tells hilariously of a brief sojourn in Los Angeles where he ended up being mistaken for a screenwriter and pitched a script about a man who discovers he’s one of the four horsemen of the Apocalypse, the studio executive loved it, the only problem when his agent called to say ” He thinks you invented the Four Horsemen. We have to keep him away from a bible for a week.”

The book is highly entertaining, frequently laugh out loud funny and at times extremely poignant as it charts Fowler’s close friendship with Jim Sturgeon. This relationship is at the heart of the book as they struggle to establish their company, have several trips to Cannes (which sounds horrible, like a giant trade fair) all the while attending multiple showings of B movies in fleapit theatres. Fowler himself can’t quite define their bond, part love story, part father-son relationship, even reaching for bromance but finding it not quite enough. It is very touching and I can’t say I didn’t shed a tear in parts. The book is both a celebration of and elegy for Sturgeon and British film, it is a wonderful read.

Film Freak is published by Doubleday and is now available in paperback.