Tom at the Farm – Movie Review 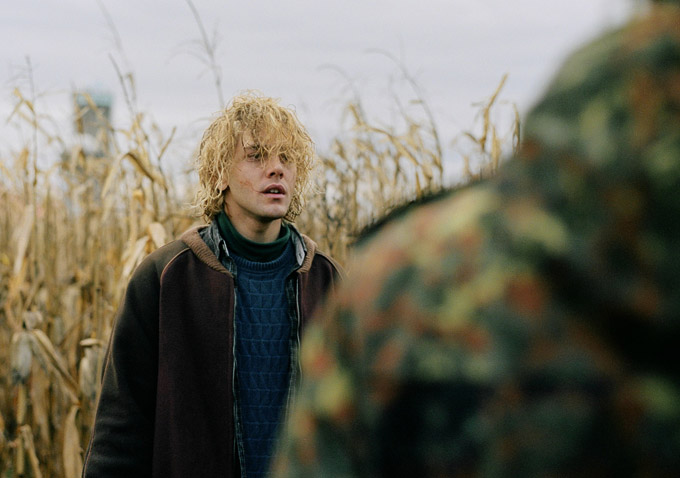 Tom at the Farm – Movie Review by Frank L.

The title is an accurate description of the mise en scene. The opening shots are of Tom driving a large black car through an unending landscape of some crop grown on an industrial scale. His destination is the childhood home of his deceased lover for his funeral. When he arrives, it is deserted. He searches for anybody in some industrial farm buildings but there is no one to be found. By chance, he finds the “hidden” key to the front door, lets himself in, snoops around various rooms which are as lacking in individuality as the landscape through which he has driven. He sits down at a table in the kitchen and nods off. His lover’s mother arrives and is far from welcoming but is polite. She is unaware of Tom’s relationship with her deceased son. The brother of the deceased is hostile towards Tom and shows it, out of sight of the mother, in violent form. The brother is determined the mother will not discover about his deceased’s brother’s sexuality. He is protective of the mother but there is not any warmth between the two of them. The funeral takes place. Forget about the camaraderie and solidarity of an Irish funeral, you will not find it here. A girlfriend of the deceased arrives to destabilise matters further. Tom finds himself effectively incarcerated at the farm. There is little interaction between the characters other than between Tom and the brother which is highly charged.

The central character Tom is played by Xavier Dolan with an assured incredulity as he tries to handle the unlikely series of events which dominate his stay, albeit brief, at the farm. There are some memorable scenes: a dead Friesian calf being dragged by the hind legs by a tractor, a sharp hate filled slap by the mother of the brother during supper and a magnificent but unlikely performance of the tango with the brother leading Tom in that sexually charged dance. All of these images combine to underscore the fact that the farm is not a place an outsider would feel at ease.

This is the fourth feature film directed by Xavier Dolan, a Quebecquois who became 25 years of age a couple of weeks ago. There are great moments of suspense between the brother and Tom as the brother seeks to assert his dominance over Tom. There is a fear throughout for physical safety of Tom. He is in a hostile place. This fear keeps you engaged as Tom and the brother work out their mental arm- wrestling match. Tom’s physical fragility in comparison to the brother’s more imposing physique ensures the tension between them remains. The abilities of Xavier Dolan in this film are manifold and manifest and I look forward to seeing his future work.