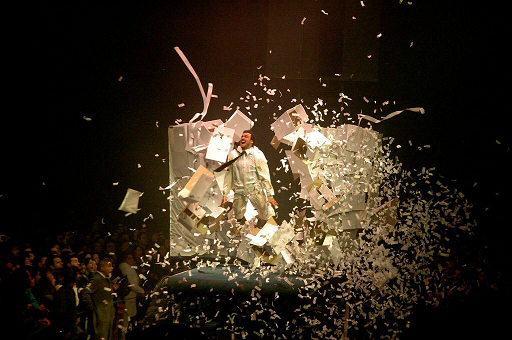 As you enter the old Dell Factory, renamed the Culture Factory for the purpose of the City of Culture events, you are led through a series of corridors with dark curtains on either side. This all helps to heighten the sense of excitement that you are going to see something a bit special. At the end of the corridors, you arrive at a typical music festival setting, a place selling some pretty tasty sausage/ steak baps and a large scale bar, ready for the masses. There’s some quirky art work and a stage with dance music pumping. It feels like we’re just settling in at a music festival and not a theatre/ dance show, but I guess Fuerza Bruta crosses that line between both worlds.

It’s unusual to see the diverse crowd wandering through this space, as there were all sizes and ages within. Some families complete with pretty young children were there, and in truth there is nothing too shocking in the show, despite the warning that it is not intended for youngsters.

Once the main venue opens, you are brought through to another part of the building. The roof in this space is at a huge height, as you would expect from a building intended for fork lift trucks and over head gantry cranes, and you can see the original structure high above. Once in place, the room darkens and the show begins!

The images and world that Fuerza Bruta creates is one of high spectacle with strobe/ flashing lights and all set to some loud techno beat. The music does vary through the hour long performance, but mainly it is loud, drum based music with an african feel at times. It was considerably better than I was expecting and worked well with the show.  There is no stage as such, and the performers appear all around you through the evening. You are on your feet for the duration and are encouraged to move around during the show.

The actors, dancers, acrobats or whatever you want to call them mainly appear on a travellator, with the man in the white suit walking and running against the machine. Objects and individuals are fired at him, and he avoids each of them as they shoot past, and fall behind at the end of the machine. At other times, acrobats on wires run on a curtain draped around the venue.  They do cart wheels as they are tugged from one side of the venue to the other. Sometimes the show is pure dance, with the performers showing their moves on industrial style scaffolding. In the most spectacular sequence, a swimming pool is lowered from the ceiling, and you can see the performers slide and splash about in the waters above.

This event is pure spectacle, and there is not even a hint of a story but it is very enjoyable at that. It never leaves you in the one place for too long, and never lets you get bored. As you would expect from a show that has toured the world for the past ten years, it is very impressive and dazzling at times. The lighting works well and while the music may not be to everyone’s taste, it does suit the event.

Tip: try to get to the centre of the venue, as that is where the swimming pool is, and it is best to be directly underneath!

Fuerza Bruta runs at the Limerick City of Culture