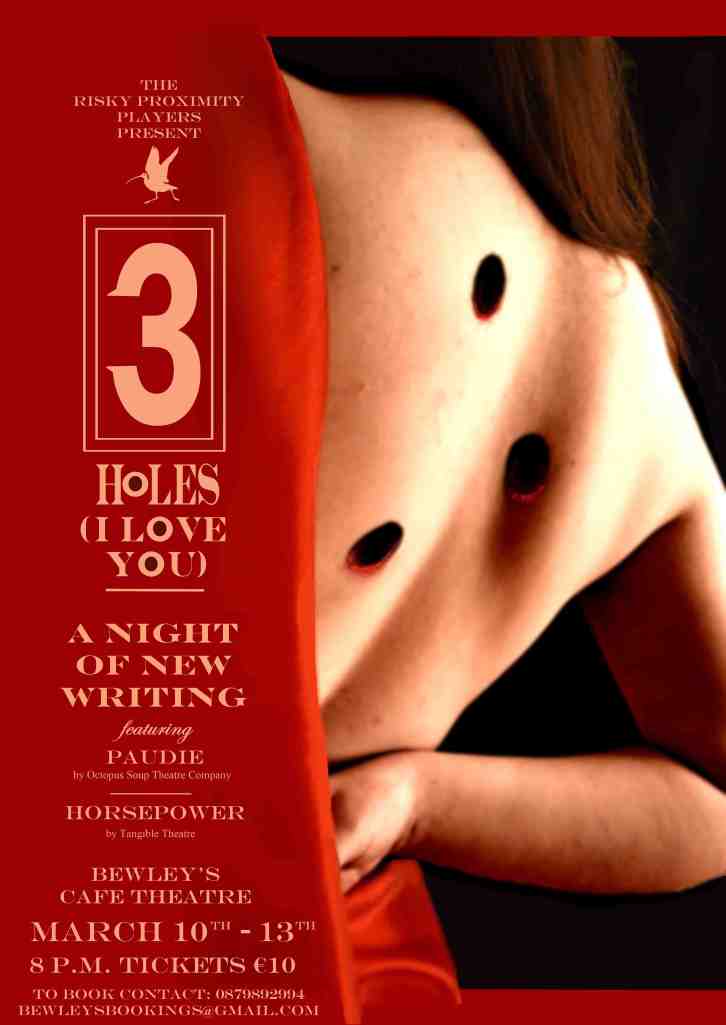 It can be difficult for new writing to find an outlet so this amalgamation of three theatre companies to showcase new work is a welcome addition to Irish theatre land. The Risky Proximity Players, Tangible Theatre Company and Octopus Soup Theatre Company all present very different works with their only common ground being the fact that these are all new pieces. As with any venture of this type the quality of the works can vary and everybody will have their own personal favourite.

The evening opens with Paudie by Liam McCarthy, a short but sweet tale about an elderly actor who is having difficulty remembering his lines. When his director Miriam encounters him in the theatre after hours she finds that she becomes part of his reminiscences of his glory days.

Next up is Horsepower which is written by Ian Lawless and Jemma Curran based on the original script by Maurice Dunphy. This tells the story of two very different men from different generations struggling to deal with the death of a woman they both loved – one as a daughter and one as a lover.

Finally we get Graham Tugwell’s Three Holes (I Love You) a surreal love story set at Christmas as a man gets set to introduce his girlfriend Imelda to his parents. However, their relationship is far from normal and his parents can’t help but voice their concerns.

While all three are entertaining my personal favourite was Tugwell’s offering which was surreal and quirky with plenty of humour mixed in with the drama. It left some unresolved plot points which was unsatisfying but on the whole it was extremely engaging. Paudie had some promising writing and a lovely arc however I’m not sure the characters have life outside of what we see here. Meanwhile Horsepower was incredibly powerful up to a point but just as it peaked there is an additional scene which detracts from the impact of the piece and could easily be cut.

Much like the plays the quality of the acting varied but on the whole the performances were solid however Three Holes and Paudie both cast young actors as older characters which in a small space like this is very distracting. In a larger venue clever make up can help disguise the fact that someone is far too young for a role but here it was painfully obvious that we were looking at people who were far too youthful to be realistically cast in the roles they played. Throwing some talcum powder in your hair does not automatically make you look like a pensioner and the actors youth really detracted from what they were doing. The only piece that had age appropriate actors was Horsepower and it made a huge difference. I would suggest if these pieces run again that the actors playing age is actually that of the character.

That bug bear aside this is a lovely mix of new works that highlights the fabulous talent that we have in this country. With more resources and bigger budgets all of these writers and companies would be household names. There was amazing potential here and I look forward to seeing what else comes from the pens of these exciting talents.

A Night of New Writing runs until March 13th