Is Looking (Sky Atlantic, Monday: 10.35pm) America’s answer to Queer as Folk, or an all male Sex and the City?  Set in San Francisco, it follows the lives of three men. Patrick, played by Jonathan Groff, is a successful video-game developer who is looking for love; Agustin is Patrick’s best friend and an artists assistant who isn’t totally sold on monogamy and Dom who is a wine waiter with issues. Although there have been plenty of gay characters in recent TV shows, a series that shows the nuances and complexities of modern gay relationships is to be welcomed. Michael Lannan developed the show from his short film Lorimer(2011), so the series has some indie-film sensibilities and is more like a ongoing story cut into 30 minute segments rather than complete episodes. Fans of Quantum Leap with be glad to see Scott Bakula back on the small screen playing a character not unlike his Beyond the Candelabra turn.

The mini series Bonnie and Clyde is starting on Lifetime on February 6th and is based on the story of Clyde Barrow, the charasmatic armed robber who sweeps Bonnie Parker off her feet. The two made history  when they went on one of the most infamous bank robbing sprees. Clyde is played by Emile Hirsch and Holliday Granger plays Bonnie. Bonnie and Clyde boasts an impressive supporting cast with Holly Hunter playing Bonnie’s mother and William Hurt playing Frank Hamer, a quiet lawman drawn out of retirement to give chase to the pair. This was made by the History Channel in the states, and may well be style over substance without any actual historical accuracy. If you are a fan of the 1967 Beatty/Dunaway classic you might want to give this a wide berth.

Sky Atlantic have set a premiere date for the highly anticipated HBO series True Detective. Due to air on February 22nd, this 8 part series stars Matthew McConaughey and Woody Harrelson  as two detectives whose lives are tied together during a 17 year hunt for a serial killer in Louisiana. Set in 1995 and 2012 when the case is reopened, True Detective is testimony that much of today’s best acting is happening on the small screen. Definitely one to watch. 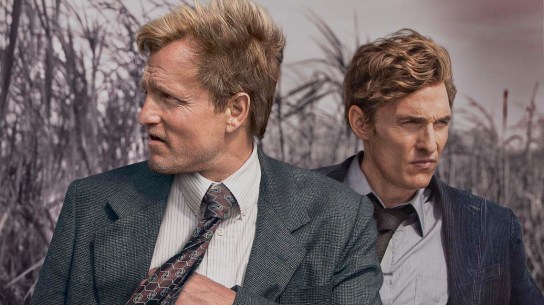