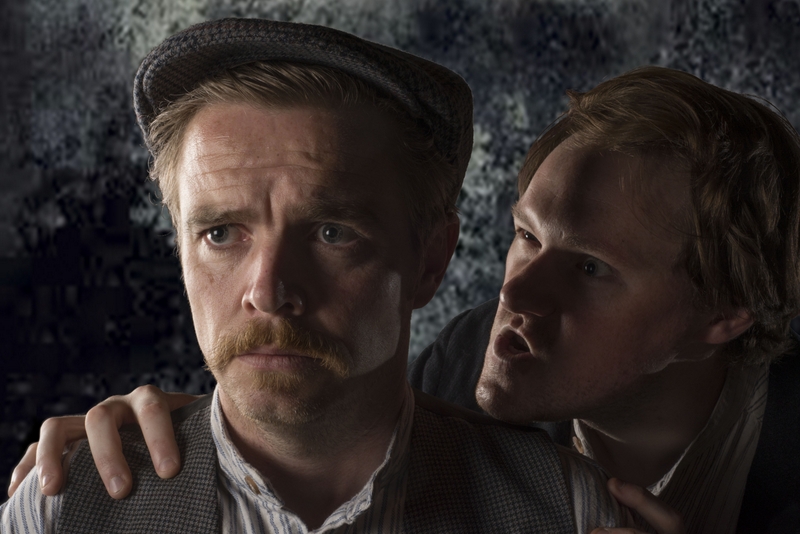 Small Town Ireland in the 1950s and 60s has rarely looked more frightening, depressing and claustrophobic than in Pat McCabe’s ‘Frank Pig Says Hello’, adapted over twenty years ago from his own influential and much-praised novel, ‘The Butcher Boy’. Ireland, and specifically rural parts of it, was so screwed up then and, as we look back on the Past, it has taken writers, not politicians, to both hold up a mirror to who we were and how we lived and protest about the dreadful injustices that transpired. ‘Frank Pig says Hello’ is part of that literary tradition.

The Mill’s production is in the preferred ‘two-hander’ format, concerning a younger Francie Brady as a child (‘Piglet’) and his older self, Frank. Piglet grows up in a mess of a Household – a wet-brain drunken Father and a Mad Mother – he doesn’t really have a chance. McCabe is looking at madness in the blackest way possible. Piglet tries to live within this insanity but, after a series of cataclysmic events, descends into psychosis and eventually commits murder.

Both Actors deserve enormous credit for playing thirty characters between them (young and old, male and female). Gerard Adlum as Piglet assumes the main role with great craft – moving the audience when required, frightening them at other times, but never losing our sympathy or compassion. The communication and stage-relationship between Adlum and ‘Frank’, Patrick O’Donnell, makes for a fast-paced and stimulating artistic event. O’Donnell exhibits an impressive acting range and comfortably meets the needs of the role/roles. The Director, Geoff O’Keeffe, is to be credited for using the intimacy of the ‘Mill’ stage and utilising a spartan set, made all the more effective by good lighting and sound.

McCabe’s take on the times covers all the areas that damaged this country so badly post-independence. We have the abuses by Church and psychiatric institutions, the ignorance and backwardness of the valleys of the squinting windows and the sheer hopelessness of being stuck in a place with no way out. This is a darkly funny Play with plenty of humour; sometimes the only way to react to the Dark is with laughter. As well as being a scathing take on the State of the Nation, it is a tale of love, loss, childhood and how, in the Wordsworth’s phrase, ‘the Child is father of the Man’.

By Dan O’Neill – Dan writes on TV at tvreviewguy.blogspot.com and on Politics at danoneill.wordpress.com