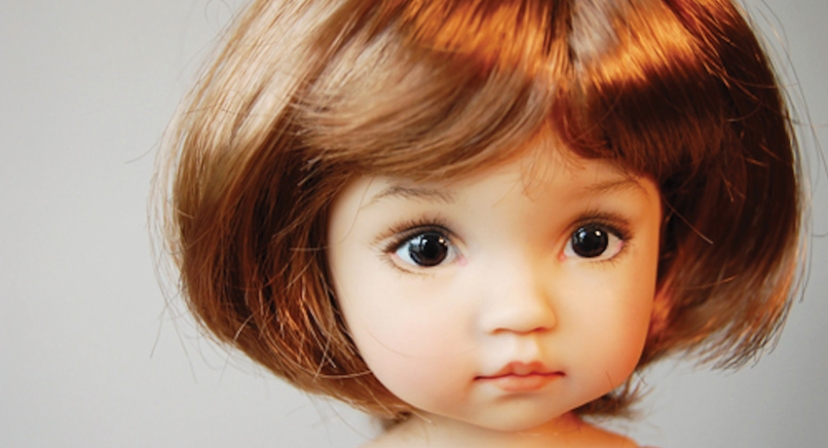 From the red lighting to the provocative costumes to the suggestive Chubba Chubb sequence, everything in Sorcha Kenny’s Dolls asks to be noticed. As the audience takes their seats, the production is already working to get our attention with the slick set from Ciaran O’Melia (last night shortlisted for a World Stage Design Award) drawing us into a world of confinement. Five female figurines flop about the stage, some carried on and deposited in certain positions, their lifeless limbs draped over black cubes on the minimalist set. Above them in giant neon lettering hangs a reminder that these are no ordinary actresses – they are dolls, the desensitised, dehumanised by-product of an image obsessed modern culture.

While the short production doesn’t quite live up to its blurb promising a range of emotions from ‘exhilaration to revulsion’, Kenny’s avant-garde take on the degradation of women in today’s society is an interesting and clever piece of work. Dolls and its surreal activity captivates from the beginning, decrying the demands placed on modern women to look and act a certain way. When the image is all important, the interior becomes inconsequential.

The frantic desire to be noticed and praised takes precedence. Dolls both highlights and mocks this phenomenon, more prevalent than ever in our social media era, by questioning the lengths to which women will go to achieve a conceived notion of perfection. “Men dream of women,” announces the male voiceover at the start of the play. “Women dream of themselves being dreamt of.” The babyish voice of a beauty pageant contestant backs him up moments later: “I want other people to notice me.”

As the black cubes become pedestals and the five dolls in their matching red patent pumps visually arrest in a well-executed choreographed piece to Doll on a Music Box, we glimpse an awakening under the mechanics, a fleeting spark in the vacant eyes. More voiceovers follow, cleverly lip-synced by the various dolls: the prepubescent pageant contestant and the creepy male host, the teenage model, the young girl who allows Daddy to control her dates, giggling helplessly as he interjects over her speech. The confines of patriarchy is a running theme, the soundtrack of predominantly American appropriated voices with their twisted views on womanhood and beauty juxtaposed with the action on stage. Some voices are instantly recognisable, such as that of Republican politician Todd Akin whose Neanderthal views on rape resonate later with the sad stories of porn stars and prostitutes. Other voices are mesmerising in their anonymity, like the emptiness of the life of the bulimic, changing her clothes over and over again at two in the morning. Image, we are reminded, is everything: “I get on the scale, I get off the scale. I get on the scale, I get off the scale.”

The action on stage is well-matched to the voiceovers, with a talented cast capable of progressing from inert creatures at the beginning to a sardonic awareness by the end that distains the voyeurism of the applauding audience. Surreal and thought provoking, Dolls is an exploration of an image fixated world and the female casualties it leaves in its wake.

Dolls runs until September 16th as part of the Dublin Fringe Festival 2013 at the Project Arts Centre, Temple Bar