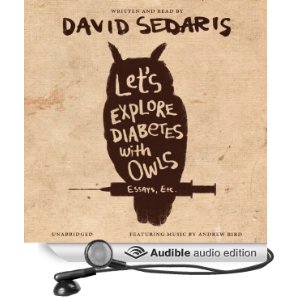 David Sedaris is an American humourist and author who came to prominence when his essays “SantaLand” were broadcasted in 1992 on NPR.  His subsequent collections of essays and stories have all had prominent places on the New York Times Bestsellers lists. Sedaris is best known for his self deprecating wit and finding humour in his everyday life.  Again this collection of essays are exploring his family life, his early childhood and funny vignettes of life on the book touring road.

Audible is the perfect platform for introducing yourself to Sedaris as he is a master storyteller and many of his stories are deeply personal.  Amongst the stories of French dentistry and annoying couples in coffee shop queues lie stories of when his sister was attacked when living with him and his lifelong failure to live up to his fathers expectations.

There is no particular theme to this collection and many of the works have already been published in the New York Times. He has also included in this collection 6 short pieces that he is offering as works for high school students involved in delivering monologes for competition. The strangest of these is about a  man who murders his whole family after hearing that  New York has legalized gay marriage called “I Break For Traditional Marriage”.

This is perhaps not his best collection of essays and if you are looking to introduce yourself to Mr Sedaris works then “Me Talk Pretty One Day” or “Dress Your Family in Corduroy and Denim” might be better places to start. But if you are already a fan of his works then you may well find yourself laughing out loud about the time that he was tempted to buy a murdered Pigmy skeleton or how he likes to buy little packets of pain killers to hand out as gifts to young people attending his book readings.