Much Ado about Nothing – Project Arts Centre – Cube – Review 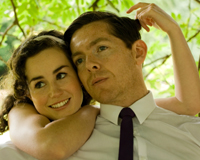 This is a bright, fast paced production of one of Shakespeare’s finest comedy. The large ensemble cast of 16 actors on the tiny stage, vary in age from the very young to the (ahem) not so young, and are constantly moving through the set, entering and leaving from three different directions.

This production transposes the events to 1960’s Italy, to gather the sense of style and elegance of that time. The sharp suits on the men and simple, perfectly cut dresses on the women work well, and give the play a sense of sophistication, but the theme is not extended much past the costumes and the men kissing each other on both cheeks! The set is simple in the extreme, with two park benches and some plants providing the backdrop.

While the movement works well at times, it felt contrived at others, and left you wondering where the characters will turn up next. After the interval, the introduction of the watch (stupid policemen!) added an element of farce to the piece that didn’t sit well with the audience (even though I must admit to enjoying it myself).

The strong performances from Benedict and Beatrice (Nick Devlin and Alex Cusack) carry the production and move it from something that could have been pedestrian to something beyond. Especially Cusack who really captured the role and had just the right amount of wit and charm for it. It’s always good to see the classics on the stage, and this one is worth a visit.

It runs at the Project Arts Centre until Sept 25th , with tickets at 16 euro, although they’re going for 10 euro tonight here.