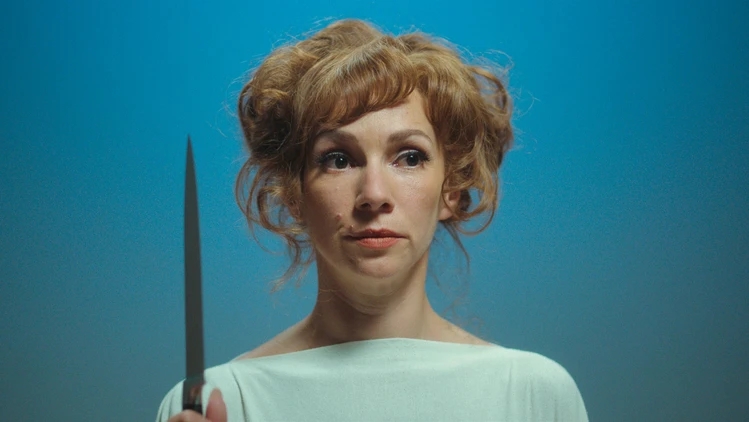 A trio of performance artists – Asa Butterfield, Ariane Labed, Fatma Mohamed – have been commissioned to produce artwork in the field of ‘sonic catering’, extracting sinister drones and whirs from cooking and its associated processes.  Overseeing all is impeccably attired director Jan Stevens (Gwendoline Christie), while hapless documentarian Stones (Makis Papadimitriou) captures proceedings for posterity.  As events proceed, Stones finds himself – and his battle with debilitating flatulence – drawn into the art-making process, while Jan Stevens interferes from without.  All the while, fissures widen within the group itself, and disruptive external forces threaten to intervene.

As Strickland is never not perverse, it seems appropriate that Flux Gourmet is both his most accessible film and his most esoteric.  He manages the paradox because the central conceit – ‘sonic catering’ – is so utterly outlandish that it pushes the film more explicitly into the realm of outright comedy.  Whereas The Duke of Burgundy (2014) and In Fabric (2018) were both amusing, at times, one was always left intriguingly uncertain as to whether their creator found them so.  In that sense, Strickland felt of a piece with a line of great British eccentrics – from Algernon Blackwood to Kate Bush – who attained a kind of heroism through their refusal of the possibility that their more out-on-a-limb work might read as humorous to the uninitiated.  It is, in some strange way, a little disheartening to feel that Strickland is making concessions to those who find his work amusing, and Flux Gourmet’s art-world satire feels both more refined and more conventional than In Fabric’s occult excoriation of consumerism, or The Duke of Burgundy’s genuinely affecting consideration of sexual monomania.

That being said, Flux Gourmet is still a delight from start to finish.  Strickland’s aesthetic preoccupations – musical and sartorial – are thoroughly integrated, and there is real fun and real bite in his withering portrayal of the ‘arts facilitator’.  Christie is an absolute hoot in the film, coming across like a more ineffectual version of Delphine Seyrig’s silky villainess in Daughters of Darkness (1971) – a piece of vintage Eurotica that surely has its place in the Strickland taxonomy.  Elsewhere, Asa Butterfield is a fantastic cartoon of young male angst, and Fatma Mohamed – a Strickland mainstay – seizes upon the meatiest role he has yet bestowed upon her (though it’s important to emphasise here that her branch of sonic catering is exclusively vegetarian).  Ever charismatic, Ariane Labed has the most contained, nominally straightest role, and she manages to locate intriguing notes of humanity and pathos – no mean feat within the ultra-rarefied atmosphere.  Similarly, Papadimitriou’s beleaguered documentarian is perhaps Strickland’s most tender creation.  One does genuinely feel for him during his on-stage colonoscopy sequence, particularly when said colonoscopy is being administered by Richard Bremmer, in a wickedly hilarious turn as the institute’s malign, Classics-quoting doctor.