b*spoke Theatre Company in association with The Civic, Ireland
Dinner With Groucho by Frank McGuinness

Groucho Marx was a famous Hollywood actor and his films were loved by thousands. He was the most recognisable of the Marx brothers and starred in many of their movies including A Night at the Opera and Duck Soup. At the other end of the artistic spectrum, T.S. Eliot was widely considered to be one of the 20th century’s greatest poets and won the Nobel Prize in Literature in 1948. Surprisingly, these two men were friends or at least met and corresponded on a number of occasions. The spark for this unlikely friendship was when Eliot wrote Marx a letter requesting a photograph. This play imagines a meeting between these two unlikely diners.

The play stars Ian Bartholomew as Groucho Marx and Greg Hicks as T.S. Eliot. It is largely a battle of wits between these two characters. There is unease between the two, as early on they test the waters, unsure of the intentions of the other. The third and final member of the cast is Ingrid Craigie, who plays the Proprietor of this bizarre restaurant, acting as the maître d, waiter and chef! 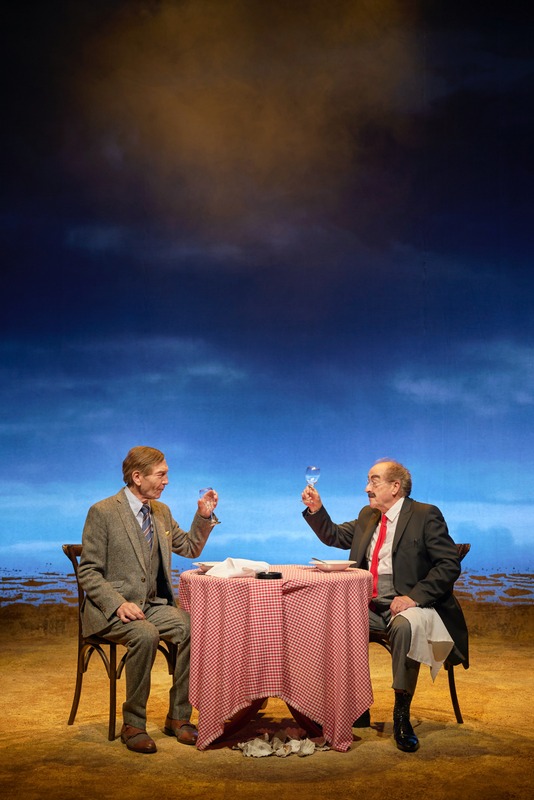 The set gives us an idea of what is to come. There is a round table with a chair on each side. The table is in the middle of a desert landscape, with sand visible to the horizon and a blue sky reaching high above. The landscape gives us the impression of one of the protagonists in Beckett’s work, as they struggle against an unknown power. It creates a sense of unease, as we wonder why or where this dinner is taking place!

Initially, it is quite hard to know what to make of this piece. It starts slow, as the two main protagonists verbally joust with each other. There are literary musings on King Lear with an alternative ending that will surprise many. There are magic tricks and dance routines, as any mention of champagne changes the mood to vaudeville! Ingrid Craigie creates a number of delightful interludes as the Proprietor. She is a powerful, commanding figure and the two men are captivated by her. The quality of the acting is impressively high and each character has depth and colour. The main thrust of the piece seems to be a musing on death and our purpose in this world, but it is all quite surreal and filled with whimsy! It’s a colourful and good-humoured addition to this year’s Theatre Festival.