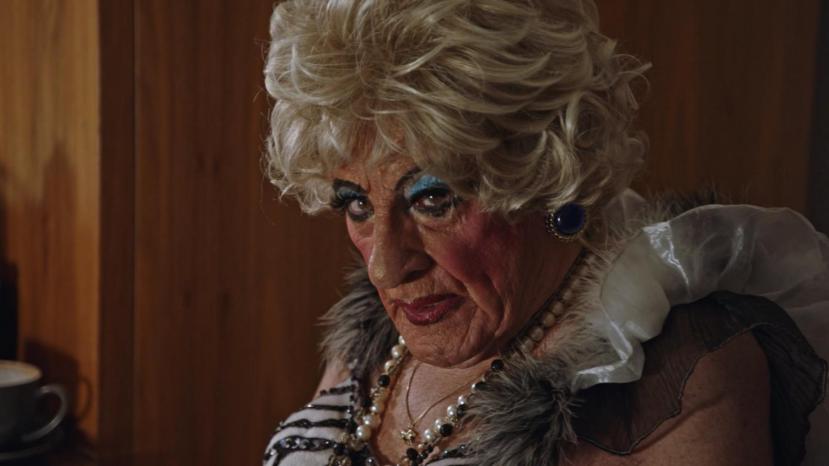 David Raven has been performing as a drag artiste Maisie Trolette for over 50 years. He does not like the term “drag queen”. He has been around a long time and his career stretches back to the time when homosexual activity was a criminal offence. That censorious time has left its scars as this documentary shows.

This clandestine past existence is also apparent in this documentary as it shows or rather does not show contemporaneous footage of Maisie Trolette performing at the height of her powers at such iconic venues as the Royal Vauxhall Tavern. Presumably because little of such footage exists. Consequently, the documentary concentrates on events in Brighton today where David Raven lives as they lead up to his 85th birthday. The storyline is enhanced by the visit to see David by one Walter Cole aka Darcelle XV, an American aged 89, who according to the Guinness Book of Records is the oldest drag queen in the world. However, Maisie’s drag emanates from the tradition of pantomime while Darcelle’s is more in tune with an American beauty pageant.

The documentary shows David living in his basement apartment in Brighton where he has a few regular visitors who are also into drag. He has a strong network of friends. However, he has not any living relatives as his son and his lover have both died. In one sense he is alone but because of his alter ego of Maisie he is very much not alone as the documentary makes clear. The documentary shows a small tightly knit community who look after each and look out for each other

The arrival of Walter to do a show with David in Brighton is an exceptional event in a world of close-knit friendships. The differences between David and Walter are exemplified in their dressing room when they are transforming themselves into Maisie and Darcelle XV. David is thin with his skin hanging loosely while Walter is overweight and needs all sorts of stretchy apparatus to make Darcell XV statuesque when she appears on stage. Walter has a more commercial aspect and has been financially successful which David has not. Money is not something which seems to impinge on David as he lives on what he has. While Walter and his family have managed his career as a drag queen so that he a financial success.

David lives with the infirmities of old age strongly alleviated by his small band of loyal friends. He is not cut off from the world like many other 80-year-olds who live alone without a family. His alter ego Maisie keeps him firmly in touch with and an important part of a small and vibrant but younger community which appreciates him as part of their community- a much loved and admired senior member.

It is an unlikely story but all the more valuable for that. Maisie Trolette knows how to handle the vicissitudes of old age.