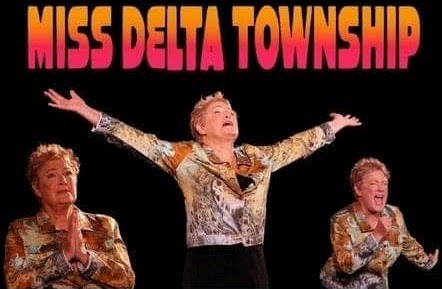 Miss Delta Township –  Teachers Club – Review
by Gearoid O’Byrne
The Teachers Club (Studio), 36 Parnell Square West, Dublin 1
Date/Time: 2,7 May @ 16:00 (Matinees); 2-7 May @ 19:30 (Evenings)
As part of the IDGTF – Week 1
This is a moving one-woman show which premiered in the Cape Rep Theatre in Cape Cod, (Massachusetts, USA) last year and stars playwright/performer Joanne Callum Powers.
Joanne begins in 1965 with a dramatic story of staged carnage, as her brother Billy fakes his own death for dramatic effect and, using comedy, one-liners, pathos and poignancy, traces the travails of growing up in her family in the USA from the 1960s to the 1990s.

She expertly weaves comic stories, decade by decade, about her parents and siblings, in particular her brother Billy to whom she was closest and who was tragically lost to AIDS in the 1980s. Following this, Billy’s voice is forever in her head like an alter ego, chiding her for not fulfilling all their childhood dreams of Hollywood fame and glory, and poking fun at the mundanity of her middle age suburban existence with Barry and 2.5 kids!

This is an autobiographical show but also a deeply moving homage to her brother Billy whose life was cut short so early. Expertly staged, and never static, it’s fast, funny, witty, sincere and moving. Being based on her lived experience, it has a rare sense of authenticity as she keeps Billy’s memory alive and honours their childhood dreams by recounting the story of their lives, warts and all. Well worth catching this week.
Tickets for all shows in the International Dublin Gay Theatre Festival are available at www.gaytheatre.ie