The evening starts with a tall, athletic African American man on stage in his underwear! This is the playwright, Branden Jacobs-Jenkins, or an actor playing him at least (Patrick Martins). He talks directly to the audience about his discussions with his therapist in New York and his struggles to get a break in theatre. He then talks about his favourite playwright, Dion Boucicault and in particular the difficulties of casting one of his plays. From this initial moment of postmodernism, we are plunged into the world of the play through the fractured lens of modern-day race relations in America.

This is a modern retelling of the Dion Boucicault play, which was in turn based on a novel! The original book was The Quadroon by Thomas Mayne Reid (1856), which was later converted to the stage as The Octoroon by Irish playwright Boucicault. The play opened in New York in 1859 and was a huge success, running for several years. To give some historical perspective, the American Civil War started in 1861 and slavery was abolished in 1865, so a play that discussed a relationship between a white man and an Octoroon (a person who is of one-eighth African/Aboriginal ancestry) was quite a controversial topic. For a modern audience, the play is problematic, as it features racist caricatures and speech patterns. It is, therefore, an ideal subject matter to be retold in this fashion.

This updated version of the story, An Octoroon, was written by Branden Jacobs-Jenkins who has updated the text for the modern world. Jacob-Jenkins’ play uses the skeleton of the original, its characters and settings along with large pieces of the original text, but has changed the emphasis. He adds segments of dialogue to minor African American characters who have thoroughly modern sensibilities. The play was first staged in New York Off-Broadway at the Soho Rep in 2014.

The play deals with some difficult topics and its use of black and red face could be too much for some. It comes with a content warning from the Abbey which can be read below. It’s not for the faint of heart but the use of humour allows the playwright to discuss subjects which would otherwise be uncomfortable. The characters of Dido (Mara Allen) and Minnie (Leah Walker) act as the conscience of the piece and their conversations include many of the most cutting insights. Rory Nolan plays a multitude of characters (Playwright / Wahnotee / Lafouche) to impressive comedic effect and his dance sequence will be indelibly marked in the minds of all who see it! Maeve O’Mahony plays the self-absorbed Southern belle Dora, who wafts into scenes always looking for the attention of the leading man. Patrick Martins also plays a number of roles, often in ‘white face’. He has a number of fight scenes with his alter egos of George and M’Closky which are cleverly handled.

For all its invention there are moments in the play that don’t quite work. Many of these stem from the original source material, including its difficult fifth act. The device of using the earlier play is a double-edged sword and its complicated plot of treachery and deception could have been simplified without losing the intent.  The playwright Branden Jacobs-Jenkins has created something quite unique and this confident cast does it justice. There may be those who are offended by the subject matter or how it is handled, but there is much to admire in this fine production.

An Octoroon – Content Advice:
An Octoroon uses caricatures and racial comedy to challenge societal conventions. It features murders, racial violence, and obscene language, including the N-word. 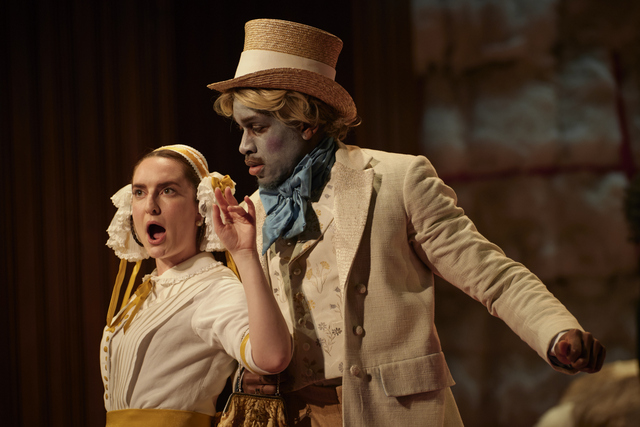