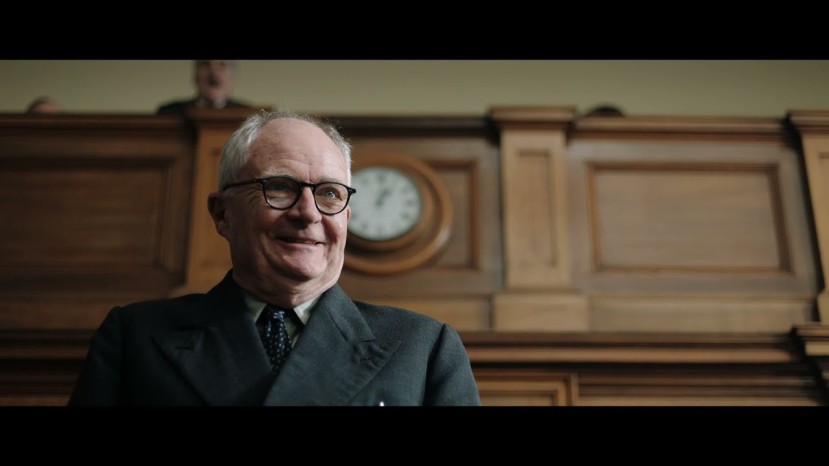 In 1961, a portrait of the Duke of Wellington by Francisco Goya had been stolen from the National Gallery in London. Not long before it had been purchased by the Gallery, with great publicity, for the then astounding sum of £140,000 sterling. A nationwide search began to find it and a reward of £5,000 was offered for its recovery. There was no sign of the portrait.

Meanwhile, no one was paying much attention to the campaign of one Kempton Broadbent (Jim Broadbent) to have old age pensioners exempt from paying the television licence fee. He was a  campaigner on all sorts of fronts against social injustice. He lived in Newcastle-under-Lyme in a grim industrial terrace with his wife Dorothy Bunton (Helen Mirren) who was a charlady. She worked for a Mrs Gowling (Anna Maxwell Martin) who was the wife of a councillor which impressed Dorothy greatly. She is hardworking and obsessed with the need of being respectable. She has little time for all Kempton’s campaigns and various opinions as she concentrates on keeping food on the table. They have two grown-up sons Jackie (Fionn Whitehead) and Kenny (Jack Bandeira) who has left home, has a married girlfriend and is on the verge of a criminal existence. Dorothy does not approve of Kenny’s behaviour needless to say.

These two very disparate true stories are blended carefully together in Richard Bean’s and Clive Coleman’s fine script. Kempton thinks it ridiculous for so much money to have been spent on buying the portrait when the money could have been spent on exempting old age pensioners from paying the television licence fee. He goes to London unbeknownst to Dorothy with Jackie, returns to Newcastle with the portrait and hides it in the grim terraced house.

Although the police have a nationwide search for the portrait, they are clueless as to who may have stolen it. However, Kempton makes things easier for them. He is arrested and faces trial for the theft of the painting. He is defended by one Jeremy Hutchinson QC (Matthew Goode), who seemingly has a poor hand, but he has one good point which he knows how to use.

Both Broadbent and Mirren give sterling performances. Kempton sees social injustice all around him and cannot remain silent while Dorothy knows her place in this stratified society and will not do anything that draws attention to herself. They are terrific when the two of them are on screen together.

The entire film is expertly cast and the whole unlikely story keeps your attention at all times. In 1961, many of the social barriers that the sixties began to sweep away remained intact. This funny but thoughtful film shows the failings of a complacent establishment which was about to face concerted challenges from the satirical attack of “That Was The Week That Was” and the whole generational earthquake of the Beatles. It is hard to believe now that such a world existed so recently. This is a gentle masterpiece, do go to see it and enjoy it for all its superb acting and quirkiness.