Into the Woods – The Lyric Theatre – Review 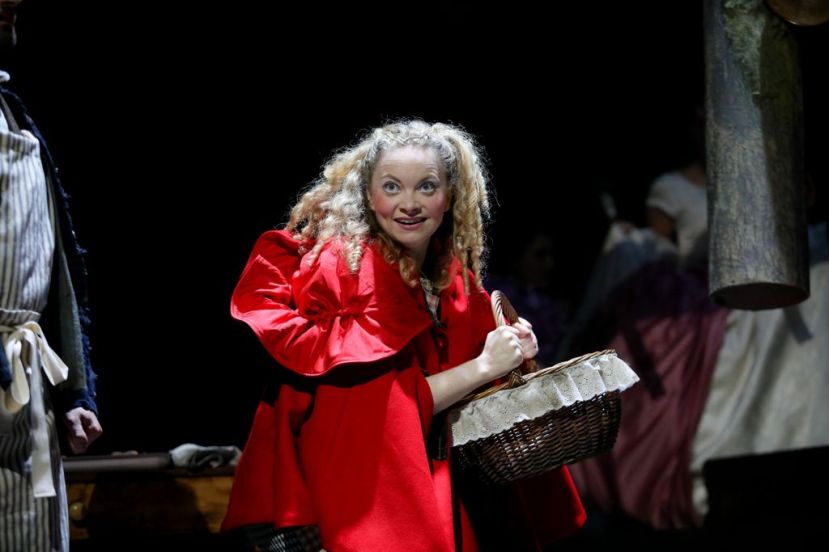 Into the Woods – The Lyric Theatre – Review
by Cathy Brown

When musical theatre maverick Stephen Sondheim passed away last year, he left behind an unassailable legacy of ground-breaking musicals that pushed the style and content of the form in new and unexpected directions. One of his most enduring and popular works is the warped fairy-tale mash-up Into the Woods, which has gone on to become a perennial favourite and a lavish Disney film.

Sondheim and his collaborator, book writer James Lapine, take classic fairy tale characters, such as Cinderella and Little Red Riding Hood, and create an original story in which a Baker and his Wife are sent off on a magical quest by a mysterious Witch to collect various items in order to break a (rather impenetrable) curse that has left them childless. The first act follows their journey as they encounter these classical characters, face adversity, and break the curse before seemingly getting their happy ever after.

But as ever with Sondheim, you have to be careful what you wish for and Act Two completely flips the tale on its head as doubts creep in, betrayal and corruption are exposed, and the cast are forced to band together to defeat a Giant running amok in the kingdom. The story—equal parts whimsical, adventurous, and tragic—rests heavily on themes of love, loss, parenting, self-awareness and the consequences of one’s actions, with the woods as much a psychological space as a physical one — an existential crucible where wisdom is gained, whether welcome or not.

At times Into the Woods can feel ponderous and moralistic, due to Lapine’s rather worthy book, but this Northern Ireland Opera production wears it lightly; enlivened by Sondheim’s music which here, under the eye of Musical Director Peter Mitchell, is punchy and impactful, using leitmotifs to shade characters and action. The rapport between the cast on stage and the uniformly excellent fifteen-strong orchestra is both subtle and cohesive. 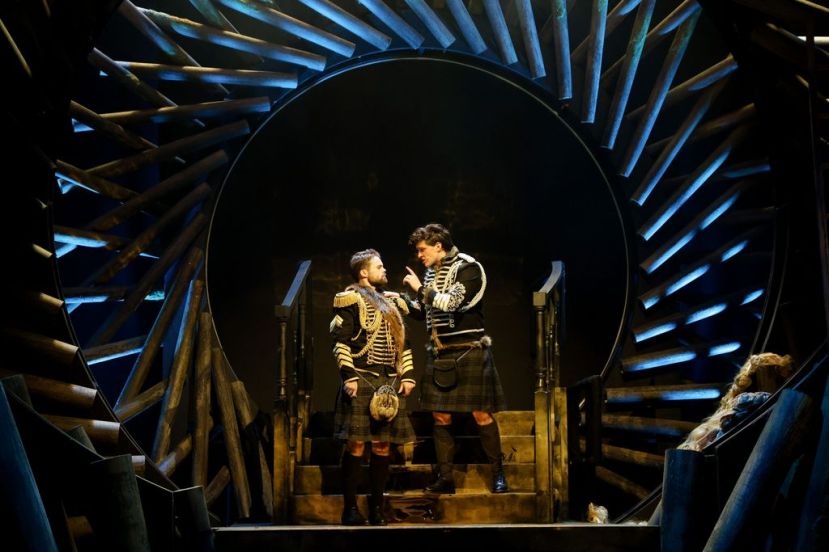 Niall McKeever’s set design is striking and immersive, all tree trunks, staircases and tiny houses which create an all-seeing eye watching over the proceedings. Kevin Treacy’s stunning lighting along with Russell Goldsmith’s innovative sound design complement the set, conjuring up flying beans, a marauding giant and attacking birds with striking ease. The set does limit the physical action to some extent, and at times the static staging leads to pacing issues, particularly in Act One.

Director Cameron Menzies leans into the humour of Lapine’s text, but as such, some of the more shadowy aspects of the work are lost. This Into the Woods is at times more pantomime and less dark fable of the Grimm’s tales that inspired it. This is emphasised by the inclusion of Northern Ireland’s most famous pantomime dame, May McFettridge, as the instantly recognisable voice of the Giant. It’s a casting decision that plays well to local audiences, but a more commanding presence would have raised the stakes.

Conor Quinn (making his debut) and Wendy Ferguson as sweet but simple Jack and his put-upon Mother are pitch-perfect, delivering laughs and pathos in equal measure. Peter Hannah plays Cinderella’s Prince with a delightful combination of smugness and buffoonery while his turn as the Wolf is delivered with a lupine relish. The presence of Allison Harding is always a welcome bonus and she invests her Witch with a deftly shaded characterisation, encompassing grandeur, playful anger and no small amount of maternal emotion, as laid bare in her striking performance of ‘Stay with Me’. There is eye-catching talent on display from Sinéad O’Kelly who invests the Baker’s Wife with a warm-hearted authenticity while Brigid Shine and Jolene O’Hara have great fun in their fractious comedy duet as Cinderella’s sisters. Sean Kearns is a warm, benevolent presence as the Narrator and his lovely rendition of ‘No More’ with Alastair Brookshaw’s vocally assured Baker in Act 2 is a particular highlight along with the beautifully performed and staged ‘No One is Alone’.

It is impossible not to be drawn in by a company that perform with such collective enthusiasm. Into the Woods might not be the strongest of Sondheim’s shows, wearing its message a bit too obviously on its sleeve, but thanks to a strong cast, Cameron Menzies and Northern Ireland Opera conjure up a broad, enjoyable production of this perennial tale of bittersweet enchantment and double-edged desire.