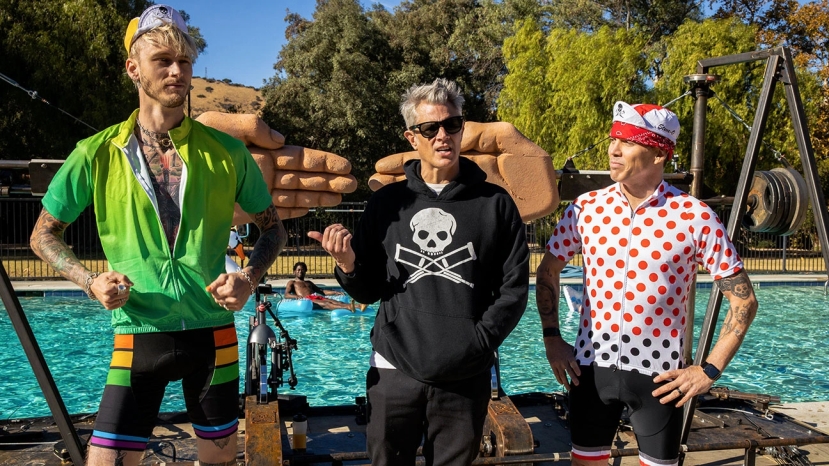 I’m going to assume that you already know the basic premise of Jackass. If you don’t then this movie probably isn’t for you. If you are familiar with the TV and the previous movies then this is more of the same – grown men undertaking some rather questionable, often dangerous and usually grotesque stunts in order to amuse each other and by default the audience. You laugh with them rather than at them which was always a key selling point for these offerings.

When the original TV show started back in 2000 they were all in their late 20s but even an infantile mentality can’t save you from the ravages of time and they are all now in their late forties and early fifties and while they all look great they are undertaking some extremely physical stunts.

Johnny Knoxville claimed last year that this will be his final contribution to the franchise saying. “You can only take so many chances before something irreversible happens. I feel like I’ve been extremely lucky to take the chances I’ve taken and still be walking around.” Indeed this film sees him hospitalised after he gets gored by a bull in one stunt (recreating a similar stunt from the Jackass archives). Fellow cast member Steve O is also hospitalised after landing badly during a treadmill stunt and all of the cast exhibit serious bruising and wounds from their efforts. Your mind will truly boggle at what they put themselves through in the name of entertainment.

Although production values may now be higher than when they started out the stunts are still as puerile and insane as back in the day. The words safety precautions do not seem to exist in their vocabulary and you will find yourself gasping and cringing as much as laughing at this. Indeed you will often wince in referred pain. I’m surprised any of them have children with the number of blows they take to their nether regions.

There are one or two new cast members in this instalment, including a female addition to the troupe Rachel Wolfson. However, she gets off relatively lightly – although a scorpion botox stunt looks as painful as it sounds. But it is the old familiar faces that hold it together. What’s astonishing is that they filmed this during the height of the pandemic. While the rest of us were sitting at home binging box sets, these guys were literally taking their lives in their hands. If this was the first-ever offering I would have said that the lockdowns drove them mad but clearly they collectively have twisted minds and just enjoy coming up with ever more outlandish ways to torture each other.

I had thought that the concept might have run out of steam by now but it still holds up. This could be my post lockdown brain talking but I laughed far more than I expected to. If you have any sort of phobia or are offended by…well…anything… then avoid this as there will definitely be something triggering in it, but for anyone just looking for some uncomplicated laughs with a side order of cringe then this is the movie for you.