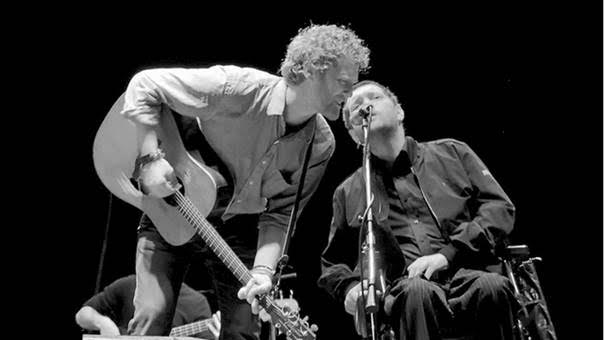 I went to this Irish documentary with no expectations.  I did not know the back story, the band Interference (formed in 1984), or Cork native Fergus O’Farrell (d. 2016).  Everything was new to me and I was all the more blown away by the man, his music and his perseverance.

Director Michael McCormack marshals a huge and engaging variety of documentary footage, family photographs and home cinema, to create a compelling and moving story of creative ability and determination.  Diagnosed with debilitating muscular dystrophy from an early age, the musically gifted Fergus moved to Dublin in the 1980s and was a key figure in the musical life of the city in that decade of seminal creativity.  However, circumstances contrived to make commercial success elusive, but Fergus never lost his creative urgency or his forceful spirit, all the while supported by a devoted family and wife.  Their whirlwind romance is captured beautifully in an elegantly animated sequence worth going to see in its own right.  The documentary was created over a ten year period and we follow Fergus through later projects and dreams including the recording of a second album.

As is clear, and mentioned throughout, Fergus had a beautiful voice but the march of his illness ultimately made the creation of sound increasingly difficult.  Ever resilient and resourceful he contrives a pipe and hose breathing arrangement with his friend Glen Hansard to overcome this particular obstacle.

Fergus’s track Gold was used in the hit film Once (2007) and subsequently the Broadway and West-End award-winning stage musical.  Incapable of touring the USA with Hansard, Fergus nonetheless travels, with family and friends, to perform in a triumphant concert at the Radio City Music Hall.   It is like a musical apotheosis of sorts. Not sentimental, not mawkish, it is nonetheless the emotional highpoint of the film and gives us a glimpse of what might have been a stellar career.   But more importantly, it shows us that the music and life itself is what mattered most to Fergus, his wife and his family.  Loving his music, his friends also loved Fergus the man.   Regardless of musical tastes, this beautifully handled documentary should be compulsory viewing for those of us seeking inspiration and motivation in troubled times.  This is indeed Gold!