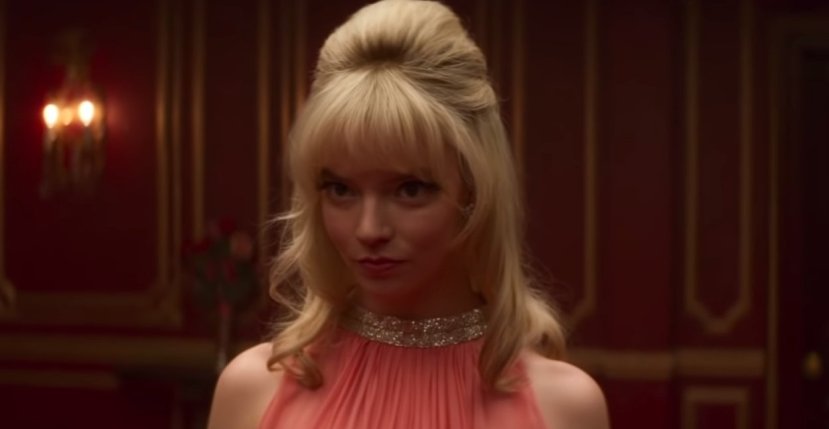 It is fitting that this love letter to the Swinging Sixties features two of the eras biggest icons in Terence Stamp and Diana Rigg (in her last performance). McKenzie plays Ellie, a fashion student with a sixth sense who is obsessed by the 60s. When she moves into new lodgings, she suddenly finds herself transported back to the era where she inhabits the body of a glamourous aspiring singer called Sandie (Taylor-Joy). Inspired and enamoured by this she looks forward to the evenings when she can travel back to the flamboyant era. But the more time she spends in the past the darker it gets and she soon finds herself, quite literally haunted.

The first thing that will strike you here is the soundtrack. Wright has a history of curating excellent music choices for his movies and this is no exception. Also, the film looks amazing – particularly the scenes in the sixties. You can see Wright’s influences a mile away but unlike some directors, he doesn’t throw in references and Easter Eggs for the sake of it. They all actually work in the context of the story.

Taylor-Joy is fantastic as Sandie. She brings warmth and depth to a part that could easily have been quite vacuous. She is let down somewhat by McKensie who for the most part plays her role as a wide-eyed ingénue which gets tiresome very quickly. The only way to describe Rigg is delicious. She absolutely relishes this role and Stamp still has a twinkle in his eye that is rather disarming and really works here.

The story starts off very strong but loses its way somewhat in the middle before sucking you back in with a clever twist. Wright does a great job of building two separate worlds although the sixties that he depicts is a very romanticised look at the era rather than the reality. Even in its grubbiest moments, it is still a kaleidoscope of colour and atmosphere which somewhat reduces the impact of the darker segments of the story.

That aside this is a visually impressive and entertaining tale with just enough menace to creep you out. The music is well chosen and apt and you will be singing the soundtrack for days after watching this. With lots of style and plenty of substance, this isn’t flawless but when it’s good, it’s very good.