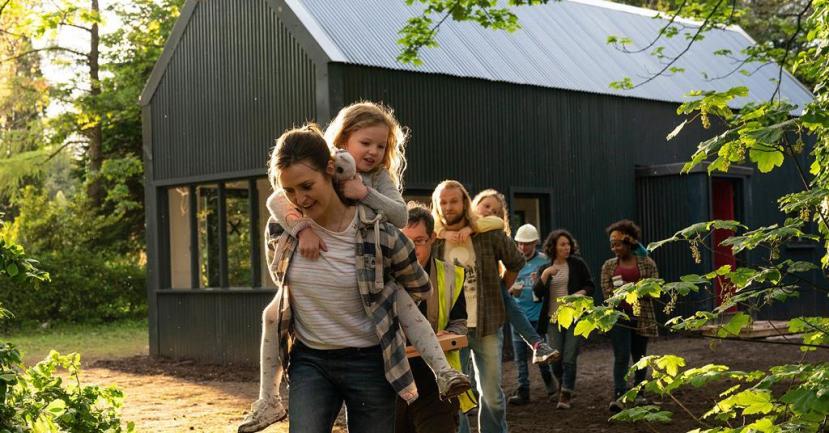 Herself – Film Review
by Fran Winston

Thanks to the pandemic this film has had a very rocky road to the big screen. Although it was intended to be released last year, like so many other movies, it fell foul of the lockdown. It was up for several IFTAs and won Best Script but still had only been seen by a handful of people (and the academy members) as they held out to allow people to experience it in theatres.

It is co-written by star Clare Dunne, who came up with the idea when a friend of hers was given very short notice to leave a property she was renting and found herself without somewhere to live. It tells the story of single mother Sandra who finds herself homeless after leaving an abusive marriage. Struggling with living in emergency accommodation with her two young daughters, she realises that she can build a house for less than what it will cost the system to house them. However, the system refuses to see her logic or to help her, so she strikes out on her own. After being gifted some land at the bottom of a friend’s garden, she enrols a motley crew to assist her with the build. Finally coming into her own and with hope for the future all is going well until her ex-husband rears his head again.

This is a no-frills sort of film. It doesn’t go off on tangents and remains on a straightforward narrative throughout. It manages to deal with several serious societal issues without ever feeling like a depressing watch. Rather it remains hopeful even in its darkest moments and you really find yourself rooting for Sandra and her family who have found themselves in this situation through no fault of their own.

Dunne is great in the lead role, but she has also assembled an impressive supporting cast. They work incredibly well together and are believable as her ramshackle group of friends. It is rare that a drama can touch on so much yet leave you feeling lifted rather than heavy, but this achieves just that. It’s sensitive to the issues raised and never feels exploitative. A rewarding movie that will spark debates after the credit roll.