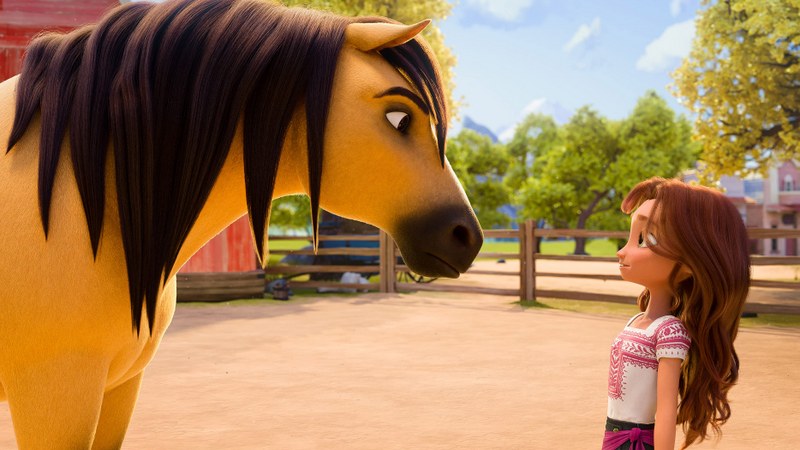 The story of a young girl’s bond with her horse has been delighting audiences since the invention of media from Black Beauty to National Velvet. The concept is usually a sure-fire winner with pony obsessed pre-teens. So it’s hardly surprising that the Spirit series, on which this movie is based has been a huge hit. This is actually the second theatrical film release of the Spirit franchise. This film is a spin-off of 2002’s Spirit: Stallion of the Cimarron and is also based on the Netflix animated spin-off television series Spirit Riding Free.

The Spirit of the title is a wild horse that a young girl Lucky (Merced) bonds with after he is captured by rustlers. When the same gang take Spirit’s family she and her friends go on a trip through treacherous mountain terrain to try and intercept them and free the horses. Throw in a widowed and distant father and an overprotective aunt and you have all the ingredients for a heart-warming drama, but that’s the problem. It all feels like they have just thrown “ingredients” at this without actually knowing how to blend them. It lacks heart and it all feels a bit lacklustre. Unusually for Dreamworks, the animation also feels somewhat stale. The animal characters all feel very one dimensional and lack the personality required to draw you in.

While it is refreshing to see a female-led western (albeit an animated one) it keeps banging home its “girl power” message instead of just getting on with it! It does have some sweet moments and one or two humorous scenes but not enough to keep you engaged. A nice idea poorly executed, this lacks the broad appeal of so many other animations and really suffers for that.