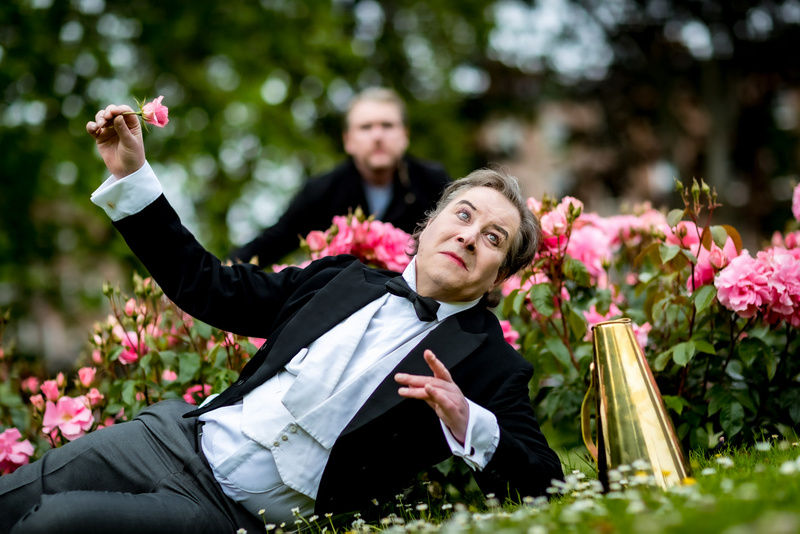 We had the chance to put some questions to Tara Doolan of Honest Arts about the large-scale live, open-air production ‘Waiting for Poirot’ which opens the People’s Park, Limerick this weekend! You can see the results below.

With the theatres currently closed, do you think it’s a good time for theatre companies to work on site-specific works?

Absolutely. Covid was a really challenging time for the industry but to take a positive note away from this whole experience, it certainly pushed us to adapt and do what we do really well, respond in a creative way to the circumstances, in this case, it is in response to Covid. We at Honest Arts have been interested in a site-responsive approach for a time and it was a great opportunity for us to explore that.

It is not without its own challenges but it has given us the opportunity to work with a large ensemble in a safe and effective way, while showing off the beautiful surroundings of the People’s Park, Limerick. Which to us, now more than ever, is a Crown Jewel in the city’s landscape.

When did you start planning for this work?

We originally started discussing ‘out of the box ideas’ in May of 2020, at that time it was with Marketa Dowling who was Belltable Programme Manager. That is when the notion of a Comedy/Murder Mystery at the People’s Park originated. We wanted to really anticipate what people would enjoy and go back to the roots of live performance and entertainment.

We were hoping that something might be possible towards the end of last summer, but it was not to be.

The Lime Tree Theatre/ Belltable then included the project in their annual funding application and it was successful, so from March of 2021, it has been full steam ahead. Starting with some simple questions. What we want to do, what we can do and what would be entertaining. We spent several weeks coming up with ideas and concepts with the writer Mike Finn, who has penned a fabulous script, then as the ideas settled we began to form our larger creative team around the script development.

Were there many bumps along the road due to the restrictions?

We have been lucky thus far, fingers crossed. Though it was hoped that we could do this last year, so, I guess that was a pretty big bump to push it 12 months.

We live more than 5km from the People’s Park so there were several weeks when all we wanted to do was get in and walk the land there and we couldn’t, so that was certainly frustrating.

I suppose the strangest thing was not only creating a site responsive piece but a covid responsive piece and really working with Mike Finn our writer and Aine Doolan our Musical Director to figure out how we could be as safe as possible while putting on an entertaining live performance. A lot of consideration was given to what experience we wanted to give the audience, how they might feel coming into a space with other patrons and live performance after a lengthy time of isolation. 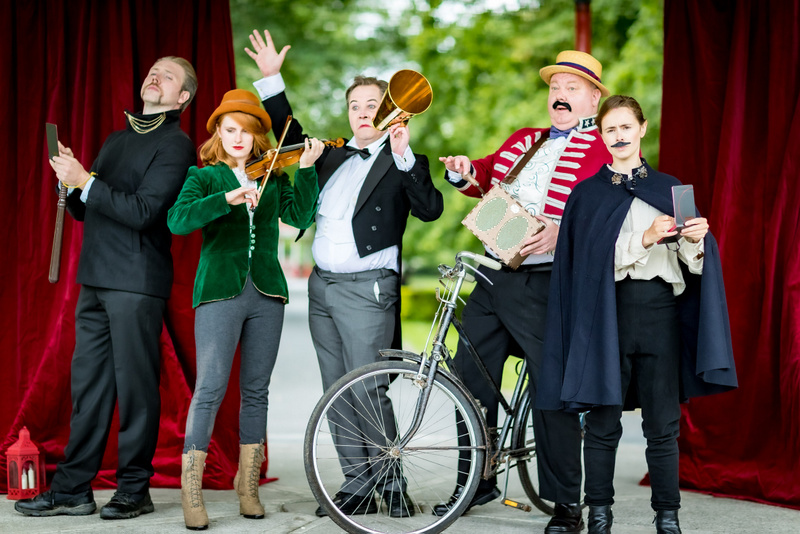 Can you tell me a little about this work?

Waiting for Poirot is a live performance full of fun for all the family, where audiences can collectively immerse themselves in this hilarious new murder mystery while Gardai Maguire and Patterson try to figure out whodunnit?

Waiting for Poirot has been written and designed to hopefully give everyone the sense of having a ‘night out’. The People’s Park is our set, we have looked at what is there and created our worlds within the beautiful setting, elevating it, with some pleasant surprises along the way.

This is a high energy, laugh a minute, murder mystery. It is set in 1925, which was a time of change for Ireland, which felt fitting for the time we are in now.

A travelling group of players have taken up residence in the People’s Park, Limerick, because they cannot perform at the theatre, again not too dissimilar to why the show is there in the first place. They plan to present a melodrama, which was very popular at that time, Murder In The Red Barn.

This is performed very much in the style of the time, melodramatic underscored theatre. Which is so refreshing and fun. However, the curtain has barely risen on this classic play when one of the actors turns up dead!

Enter Maguire and Patterson two members of the newly formed Garda Siochana, who are determined to get to the bottom of the case.

What can audience members expect?

A hive of activity, music, movement and stellar performances bringing Mike Finn’s story to life as the audience traverse the transformed atmosphere of the space. The show is performed in a promenade style, with the audience moving to the point of action around the park. People will be on their feet following the journey of Maguire and Patterson.

We hope people will need sunblock, but… if we are unfortunate enough to get caught in a shower, the show must go on, come well prepared! It is Ireland after all.

I’m a little surprised by the size of this production, as it has 11 cast members. Were you always planning such a lavish affair?

There is no doubt that it was always an ambitious idea, but it has expanded, as things do in development.

It was certainly our mission from early on that we hire as many professional performers, creatives and crew as we could. That was a large consideration along with the storytelling when we were conceptualising the piece with Mike.

The sector has been decimated and theatre is certainly a vocation as well as a profession and we felt very fortunate to have the opportunity to get people back to work but also doing what they have a grá for! Also, the park is quite a sizable set, so to fill the space, it certainly encouraged an ensemble.

We are also working with some Students and recent graduate ensemble members and crew from Mary Immaculate College. Who has made an excellent contribution to the team. It was also a goal of ours to continue the long-standing practice of learning on the job, many of the students and graduate having missed out on vital experiences due to covid. They also have the challenging role of understudying our cast, which they are doing really well and with an exceptional level of professionalism across the board.

1 Writer, 3 Directors, 11 Cast Members, 2 Dancers, 4 Musicians (Including our MD and Composer), Lighting Designer, Costume Designer, Associate Designer, Production Manager, Stage Manager, Technicians and Crew. So it is quite a team. And very challenging to keep us all apart but having so much space outdoors really helps. 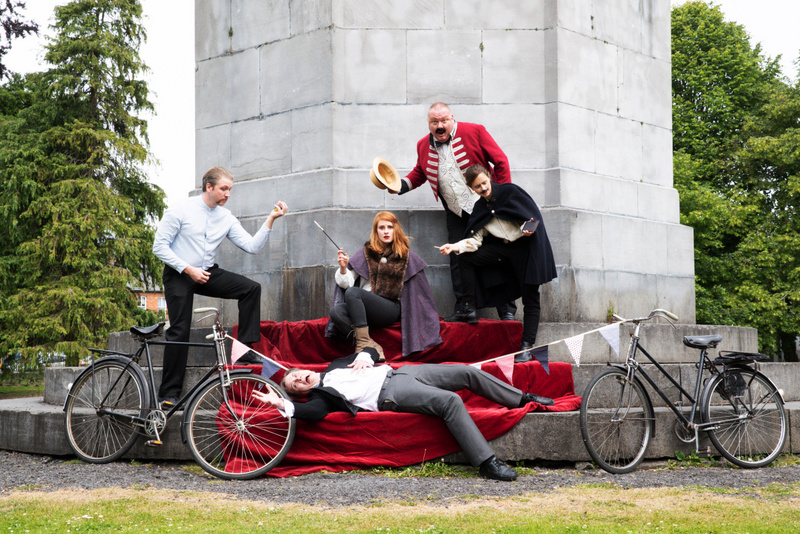 Were there any additional problems caused by the pandemic during the rehearsals?

The first day of rehearsals was like the first day of school after the summer holidays. Everyone was equally excited and apprehensive. But after the first readthrough and all the covid protocols – the fun began. It was quite emotional going back into a room that was all about play and storytelling, filled with talent. Then the band arrived and I certainly felt at home again.

All that said it is hard – so much expression and volume is lost with masks, every time you move people you’re conscious of distancing, even in selecting our instrumentation or doing a song we had to be so careful.

But we try to stay positive and pre-plan as much as we can and that has helped us now. No problems, just solutions.

I am finding that the regular fresh air breaks, which I thought might slow down the process, has actually been great and increased productivity.

What art got you through the lockdown? What did you spend your time doing?

We did a lot, a lot of planning for Honest arts. I was also working part-time on a Foundation – a TV show that had to shut down production due to Covid 19, like so many, which was a great way to occupy my mind and I was very fortunate to be able to work from home until shooting could resume.