He Dreams of Giants – Film Review 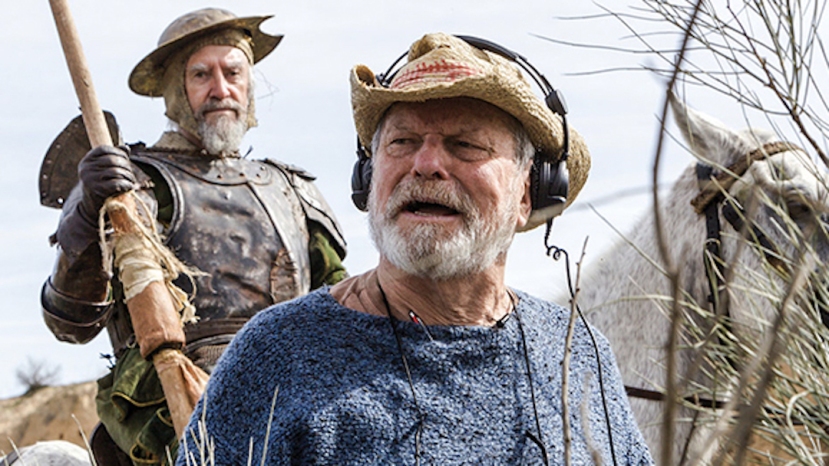 He Dreams of Giants – Film Review
by Hugh Maguire

On digital formats from March 29th

The hugely successful Broadway Musical, Man of La Mancha (1965) and later film (1972) starring Peter O’Toole was inspired by Don Quixote (1605-15), the masterwork of Spanish Golden Age literature by Miguel de Cervantes (1547-1616).  The show’s big hit number, ‘To Dream the Impossible Dream’, by Leigh and Darian, remains a standard of its type.  Similarly inspired by Don Quixote, this film is a tribute to Terry Gilliam’s impossible dream of bringing to fruition a film project over many decades, many false starts and huge logistical and funding challenges.

Gilliam is possibly best known as a member of the BBC’s hugely successful, Monty Python Flying Circus (1969-74) where his absurdist graphics, fantastical animation and imagery may, in time, be seen as the most enduring contribution of the series.  Pushing the boundary of what was technically feasible, Gilliam has tried over the years since then to transfer the inventiveness of what works in graphic form into the cinema, and this before the age of CGI; The Adventures of Baron Munchausen (1988) received much critical acclaim but was a commercial disaster.  But never daunted Gilliam continued with other outlandish projects including his own distinctive take on Don Quixote, which after a near thirty-year ordeal finally reached the screens in 2018 as The Man Who Killed Don Quixote.  In this engaging and beautifully-crafted documentary we follow the struggles of Gilliam’s creative process, clearly grasping through deft use of archival footage the battles involved, personal and logistical.  We see his finished film coming together, but also the frustrations of the many previous abortive attempts, as well as an evocative glimpse of Gilliam’s wider output and his influences, notably Fellini.

The opening sequence clearly marks out the territory with its elegant evocative shots of Don Quixote and Sancho Panza in a desert-like landscape.  But the abrupt intervention of an Airforce jet overhead highlights how the unexpected can be catastrophic and how what is apparently simple might be the result of numerous takes and abundant effort.  A shower of rain, when least expected, can ruin a day’s work and yet we can wonder at how a vision can be sustained and admire those who can share it – the Rome-based wardrobe staff storing costumes carefully over decades for eventual use.  Carol Reed’s The Agony and Ecstasy (1965) attempted to give expression to Michelangelo’s struggles in painting the ceiling of the Sistine Chapel.  In this film, we abandon the romanticised narrative and focus instead on the personal commitment and the almost hellish entrapment which forces the creative artist not only to actually forge something new but to lance the daemons which encourage that creative impulse at the outset.