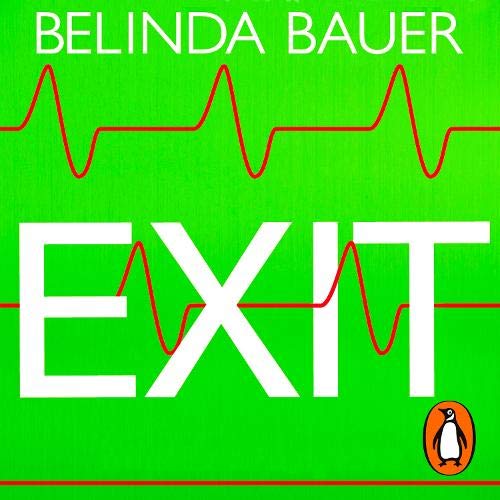 Felix Pink is a decent man. A kind man. A man of integrity. However, when we first meet him in Belinda Bauer’s new thriller he is on his way to sit and watch a man he has never met before deliberately kill himself. Felix belongs to a group who call themselves Exiteers (No, not Brexiteers!) who agree to stay with and support people who have chosen to put an end to their life. The organisation has strict guidelines which Felix must follow – not to rush or influence the people who have come to that decision, and more importantly, not to assist the process in any way. His role must remain passive. He can be only a supportive companion during their last hours.

When Felix arrives at No 3 Black Lane for his latest assignment he is accompanied by Amanda, a 23-year-old new recruit to the Exiteers, to whom he patiently explains their role and the procedure. A wheezing sound leads them to the room where an elderly man is lying in bed, gasping for breath, and they find seats nearby and prepare to wait for the end. Felix has even brought a thermos and a plastic container with a strawberry jam sandwich in case this particular visit lasts a long time. However, things do not go as planned and within a short space of time, he finds himself the prime suspect in a case of murder and must try to unravel the events that have led to this point.

With a widower of 75 as the reluctant hero of the tale, one shouldn’t expect dramatic car chases or graphic violence in Bauer’s novel. “Exit” is very much a study of character. We learn what has led Felix to this point in his life and none of the people he encounters, neighbours, villains, or police, is a mere cypher. Bauer creates a cast of fully rounded characters – we learn of their background, their aspirations and the struggles of their daily lives, all described in the darkly humorous style familiar to her many fans.

Since winning the British Crime Writers’ Association Gold Dagger award for the best crime novel of 2010 for her début work, “Blacklands”, an unsettling story of a young boy being groomed by a paedophile killer, Bauer’s idiosyncratic thrillers have featured regularly among the bestseller lists. In 2018 she was the first crime writer to have a book longlisted for the Booker Prize for her novel, “Snap”. Her works are never formulaic and the characters she introduces are memorable, from the medical student with Asperger’s Syndrome we meet in “Rubberneckers” determined to solve the puzzle he is faced with in terms only he can understand, to the desperate mother searching for her child who turns to a dubious psychic for help in “The Shut Eye”.

“Exit” is unique; a combination of a crime novel, a black comedy and a moral tale. We are led down many blind alleys as Felix and Calvin Bridge, the policeman investigating the case, both try to make sense of what has happened. Bauer holds our interest throughout and, while there may not be “laugh-out-loud” moments, there are certainly many occasions when the listener can’t help but smile. The audiobook is narrated by the excellent Tim McInnerny (probably best remembered for his roles as Lord Percy and Captain Darling in Blackadder) who makes the large cast of characters come alive and who is particularly successful in capturing the voice of the conscientious and guilt-ridden Felix.

The audiobook is available from Audible.co.uk, as are most of Bauer’s other novels, and lasts 9hrs and 42mins.