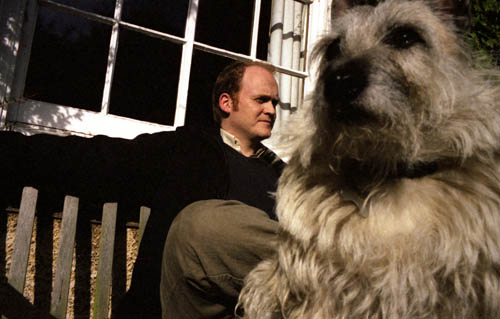 James Yorkston has just released a very fine new album called The Wide, Wide River, which is currently our album of the week! We caught up with James to ask him about the new album, life during lockdown and more.

James writes “This beautiful album I made with The Second Hand Orchestra, a Swedish band ran by Karl-Jonas, a man I have known for a few years now. The Second Hand Orchestra hadn’t heard any of these songs before the sessions. I flew to Sweden and said my hellos, then we all sat round and set up our instruments. I would run through a song, once, perhaps twice, and simply encourage the musicians to react to what they were hearing. The engineer would press record and – voila – we’d have a song down. This here album is the result of eight such castings of the net. We all love it – it was a joy to make and is fresh, spontaneous, and full of life x”

These are mad times, how are you getting through the lockdown?

I’m getting along ok, thank-you. I’m seeing a lot of my family, going on some long coastal walks, writing a lot and not missing the promo drag of airports and motorways one bit. I do miss the gigs themselves, though, and I miss seeing pals on the road, of course.

Creating an album must have been a challenge, how did the collaborations work out?

For me, it’s all about the ease in the studio and the excitement that occurs when, (and if…) we gel together in the studio, especially as they were mostly complete strangers to me. I’d written the songs beforehand, and I was confident in those, so that helped, I suppose… I’ve known KJ for a long while now, 20 years or so, and I trust his musical ears – his label, singasongfighter, has released some great, varied music, always different and exploring. It was fun going into it, knowing I’d be in and amongst musicians who were bound to be talented and curious.

Has the current situation affected your creativity?

Positively. Having this long period off the road has been a real bonus for me. I’ve loved being in the studio with days upon days of time to play with. I live in a beautiful, quiet part of the world, it’s a tourist attracting place, but when there are no tourists, there’s just the beauty remaining. I’ve been lucky, in that way.

You made a video with Myles O’Reilly going around Ireland a couple of years ago, how did that come about?

That documentary he /we made, I am very proud of. What Myles made of my script thrilled me. He got it just right. I first met him ten years ago or so, when I was doing a tour around Ireland with Alasdair Roberts and Adrian Crowley. We needed a driver, and Myles was suggested by a mutual friend. Myles ended up filming the whole thing, and I believe that was his first foray into music documentation. We kept in touch through the years, with his skills blossoming and his name becoming well known and respected as a movie maker through that time. Ten years later, I asked him if he fancied doing the whole driving / documentary thing again and I was very pleased when he said yes, for he’s good company and a very talented fellow, as we all know. And a good driver, I should add.

The interview continues in part 2 later this week…