We asked some of our favourite musicians/ artists about their year. You can see what Fraser had to say below.

An extraordinary year in many ways.  How did it affect you specifically?

Yes… an extraordinary year it has been indeed, that’s putting it politely!  It has been a challenging one that’s for sure.

There’s been massive positives and negatives this year.  As a job, I manage a retirement complex of 42 flats, housing elderly adults.  So it feels like I’ve been working nonstop since February.  It’s been very busy & quite a stressful time.  But we’ve all been ok so far, fingers crossed.

Home life has been great though.  My partner now works from home, mostly.  So I got to spend a lot more time with her & our son.  I’m pretty much a homebody anyway, so the constant lockdowns haven’t bothered me as much as they seem to bother others.  I do desperately miss going round to my friends & making music with other people though.

Where did music fit in during 2020?  Does it seem important?

Music’s been amazing throughout this whole thing.  A total escape from everything.  I’ve bought a ridiculous amount of vinyl since the start of lockdown & each night I’ve been tinkering away at new musical projects with lots of new toys.  Things are slowly coming together.

What albums resonated this year?  Can be old or new.

It’s always difficult to narrow down, but here goes, in no particular order….

Lovely jazz record that I listen to a lot when I’m out and about walking along the canals.

Oren Ambarchi – Grapes From The Estate

I’ve had this album for years.  Bought it on CD while I was at university. But I recently got the reissued double vinyl & as a result rediscovered for my love for it.

Excellent ambient album on Ultimate Records, another one that’s great when I’m out walking.

If you had to pick one album, to sum up this year, what would it be?

I have consumed a ridiculous amount of music this year.  But the album that’s stood out most & the one I keep coming back to is “Abolition Of The Royal Familia” by The Orb.

I’ve listened to them on and off for years but I think this is probably the best thing they have ever done.  It came out at the end of March & it’s a wonderfully varied and absorbing record.  I absolutely love it.

The final track on the album “Slave Till You Die” has some eerily close to home samples on it, almost a premonition of the kind of lockdown world we are currently living in.  Amazing stuff!

Kept my head down and hoped for the best really.  I’ve been massively dependent on my partner for support this year.  She’s the one that’s kept us all strong.  I wouldn’t have got through this so well without her.  Other than that, loads of Netflix, lots of weekend horror film watching with my son & as much exercise as an out of shape 42 year-old can handle.

I’ve got a few things in the works at the moment.  I’ve been working on a project with my old Small Town Boredom bandmate Colin Morrison.  It’s completely song based, so all the lyrical stuff I’ve been writing over the last few years has been set aside for this.  It’s something however that’s had to be put on hold each time there is a lockdown, as we work on it together in my studio & at his house.  We hope to pick it up again in the new year.  We should have an album finished at some point in 2021.

I’ve also been working away, as always, on some instrumental music.  Utilizing mostly piano, field recordings, modular synths, drum machines etc.  I’m really enjoying what I’ve been coming up with so far.  Slightly different from what I’ve previously released, so I’m toying with the idea of putting the Caught In The Wake Forever name to bed & starting something new.  I also plan to start a small vinyl label of my own next year, hopefully, it all works out.

An end to Covid is the main one really, or at least some sort of return to normality, oh & some Scottish Independence, that would be nice!  Not much to ask for much really… 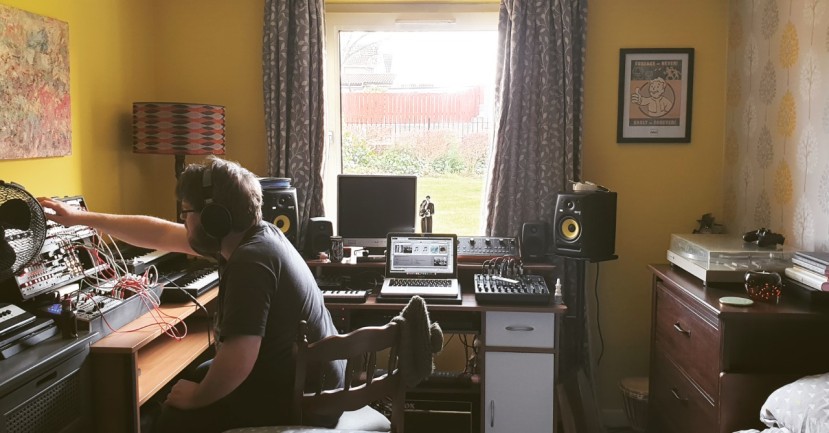