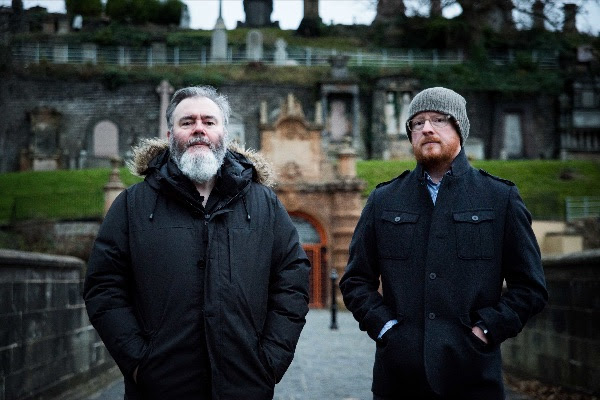 Picture it, you’re in a venue packed with other punters waiting for the main act. The lights go out and the band wave at the audience as they arrive on stage! The anticipation is fever pitch!

Yes, quite simply the thing I miss most about this year is live music… but there is hope! Arab Strap could be on stage in Vicar street in a little under a year’s time! They’ve just announced details of their first album in 16 years and also a night in Vicar Street. We live in hope of vaccines and nights going home with our ears ringing.

“It’s about hopelessness and darkness,” says Aidan Moffat “but in a fun way.”  The Arab Strap frontman is speaking about the band’s 7th studio album and their first since 2005’s The Last Romance.

Despite them being a pinnacle group of the era, Moffat makes it clear that the aim is not to “recapture the 90s” but instead to create a distinctly new album, with new tools, sounds and a forward moving sense of exploration. “This album feels like its own new thing to me,” he says. “It’s definitely Arab Strap, but an older and wiser one, and quite probably a better one.”

Across the 11 tracks, the band have tapped into their core sonic foundations and what made so many people fall for them but also stretched it out into new terrain. The deft mix of post-rock soundscapes, subtle electronics, clicking drum beats, swelling strings and Moffat’s incomparable half-sung, half-spoken vocals are all present, but so too is a variety of new additions from blasts of woozy saxophone to disco grooves and a rich immersive production that plunges you deep into the stories. “We’ve had enough distance from our earlier work to reappraise and dissect the good and bad elements of what we did,” says Middleton. “Not many bands get to do this, so it’s great to split up.”

Whilst Moffat jokingly says “we’re still doing what we always do: Malcolm gives me some guitar parts then I’ll fuck about with them and put some drum machines and words over the top”. The band reconnected with producer Paul Savage, with just the three of them in the studio, as it was the very first time around. “Paul brings comfort and trust,” says Middleton, “And a sense of continuity.” Savage’s light touch approach, combined with the band’s evolved craft, has created a potent production that brings out the best in the duo. “I’ve never been interested in making slick records,” says Moffat. “But the new stuff sounds much fuller, brighter and better because we actually know what we’re doing. I think for a long time we didn’t know how to express what we wanted in a studio.”

As Days Get Dark is a record that manages to feel like both evolution and revolution: a continuation of what has come before but also a bold leap into the future and as Middleton concludes, “There’s no point getting back together to release mediocrity.”