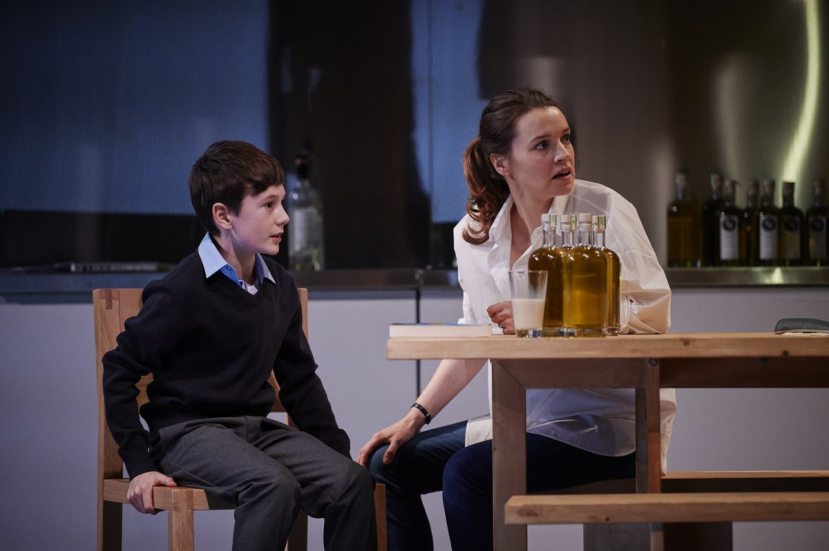 Originally premièred in London in 2012 and revived off-Broadway in 2104, Our New Girl now has its Irish première at the Gate. It is set in London and the action takes place in the contemporary, stylish kitchen of Hazel (Catherine Walker) and Richard’s (Aidan McArdle) home. Discordantly with the sleek surfaces there are innumerable cardboard boxes which litter the kitchen with many bottles of olive oil covering various flat surfaces. Hazel is pregnant with their second child and has decided to give up her career as a successful commercial lawyer. As a result of a holiday in Italy she has decided to get involved in importing olive oil. She knows nothing about the product or retail and does not speak Italian. She is out of her comfort zone and is under pressure. Richard is a plastic surgeon who is off in Haiti when the play begins, working as a medic after the earthquake. Unbeknownst to Hazel, Richard has organised through an agency a young Irish woman from Sligo, Annie (Blaithin Mac Gabhann), to help as a nanny with their son Daniel.

The play begins with Daniel (James Lonergan) the eight-year-old son appearing alone on stage with a knife and a mirror. It makes for an unsettling start. He is a “difficult” child and causes problems for his mother. The story proper begins with Annie arriving to start work with Hazel not knowing who the hell she is. The two of them have a fine exchange with the rural Annie probably winning the encounter on points. Richard eventually arrives on the scene and the tensions between him and Hazel become apparent. But also the tensions between Hazel and Daniel intensify and of the three adults Annie is the one who is the most competent in dealing with Daniel. The character of Daniel is never clearly defined but there are incidents in his past, which to an extent, explain why he is as difficult as he appears.

The relationship between Hazel and Annie throughout is on a knife-edge. The opening encounter between them has its comic moments but as the play progresses their relationship ceases to be comic and becomes more confrontational. All the while Daniel is an unknown threat to the stability of the household.

Hazel is neurotically out of control as she tries to be a mother to Daniel and run her so called business from home. She is at the end of her tether and her pregnancy weighs heavily on her. Walker is triumphant in this multi-faceted role. As is MacGabhann as Annie whose back story has its own ghoulish parts. Richard’s character is driven by the need for external praise so McArdle has less to play with from the script but the row he has with Hazel has both him and Walker sparking off each other.

The play is in two acts but each part is interrupted by changes of scene when the lighting alters and discordant music is heard. It is unsettling and it adds to the sense of tension because at all times there is a fear that Daniel will do something sinister.

What is disappointing in the play is that these various tensions are not brought to an end that fits with what has gone before. Having been so successfully created they are allowed to lapse and the tautness which dominated relaxes into something more comfortable. We never quite get the explosive ending the play promised but there are scenes where the pressure is palpable.  This complex domestic situation is cleverly drawn out and will divide the loyalties of its audience.

Our New Girl – by Nancy Harris 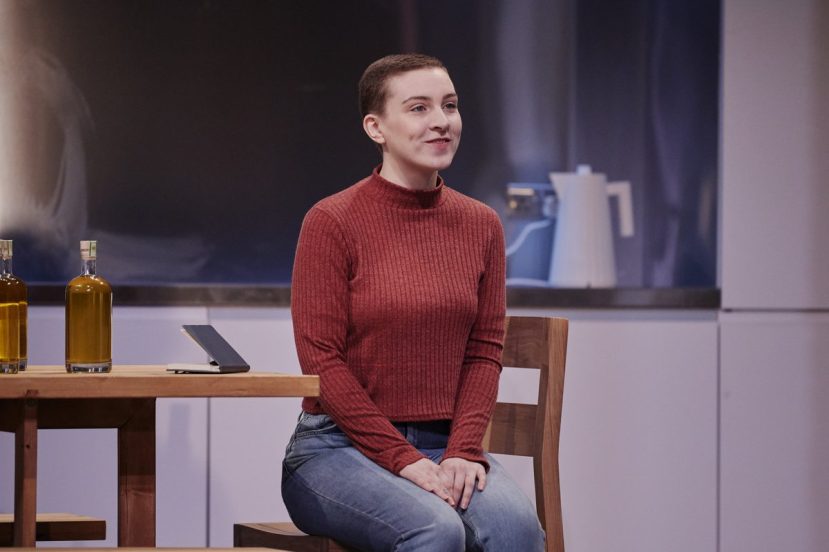