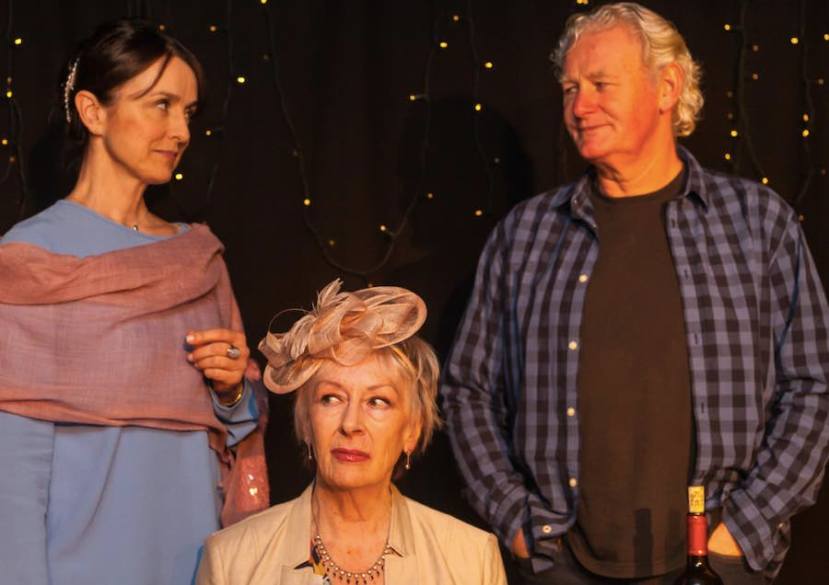 Weddings can often be stressful and even more so the so-called ‘afters’. This one is no exception. The play starts with Mrs Loftus (Ger Plunkett) slipping away from the main event. She is joined by her daughter Jane (Rachael Dowling) and their conversation makes clear that this mother and daughter relationship is not free from friction. Mrs Loftus then disappears to have a natter with her friend Maisie. That is when Tommy McDaid (Seamus Moran) arrives. He and Jane have not seen each other since they were teenagers. Much has happened in the intervening years, Tommy went to New York, got married and divorced and has a twelve-year-old daughter. Jane is back at home living with her mother having spent many years in London.

The two have some unfinished business! The story focuses on the need for silence to save the reputations of individuals who are seen as pillars of society. Respectability is of paramount importance. They tell each other the stories of the intervening years. What both have in common is that their needs and hopes were not of any consequence at the time. When Mrs Loftus returns after Tommy has left, she and Jane have a heart to heart which should have happened years ago.

Plunkett has a tour de force representing the mores of Ireland in the late eighties when respectability and the avoidance of scandal trumped everything and certainly human emotions and honesty. She also manages to bring considerable humour to the part. Dowling has a challenging role to play of being a dutiful middle-aged daughter but her life has been blighted by the behaviour of her mother and her TD father when she was a teenager. She still manages to love her mother and care for her but she now has the wisdom to stand up to her. She also has to confront the past with Tommy which requires her to understand the challenges that he has faced since they were teenagers. It is a complex part she delivers with gritty realism. Moran’s part is also challenging and navigates concern about his past with his responsibilities as a father.

The Afters is a healthy reminder of the damage that is caused by brushing unwanted facts under the carpet. The long term damage turns out to be immense. It lasts just over an hour and it was an exceedingly satisfactory way to spend a lunch hour.