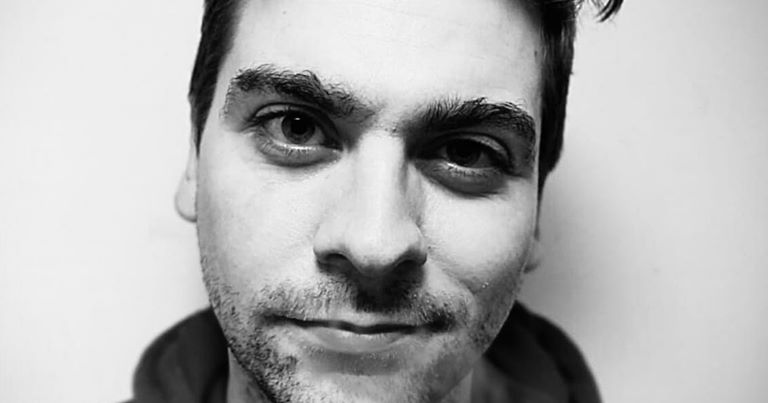 “Would you be interested in coming to see Medea at The Gate?” asks my companion above the medieval standard selected by Fizz and Chips to warm up the audience before the start of Dragon. As I ponder her suggestion I picture the contrast between the polite din floating above a sea of furrowed brows and tight-lipped faces at The Gate and the giddy rumbles of the crowd clustering around us at the New Theatre. Two young men squeeze through to sit next to us: one holding a bunch of flowers wrapped in cellophane, the other, a yellow can of IPA. For a moment, the dulcet tones of minstrelsy give way to the crack and fizz of the newly opened beer. It is a fitting prelude to Lindsay Dawson, Martha Fitzgerald, Ruadhan Mew, and Orlaith Ní Chearra’s mixture of “comedy and tragedy and drama and romance” “set today” but also “set hundreds of years ago”; a musical that weaves its light-footed take on the romantic ravages caused by a Tinder Lothario with a medieval fantasy where long-suffering villagers put on a fight to vanquish a bloodthirsty dragon. I won’t be spoiling anything if I tell you that Fizz and Chips’ idea of tragedy is far from the chilling brutality of Medea.

Dragon is articulated around alternating scenes set in disparate universes: modern day romantic comedy presents its male protagonist’s external reality; fairy tale fantasy, his inner struggle with the fire-breathing incarnation of his digital toxic masculinity. The connecting thread between the two is the trail of maidenly victims that both hero and monster have left in their wake. This ambitious genre bending shows that the authors have more bravery than the dragon-fighting peasants in their play but, unfortunately, the constant shift in setting and focus results in a narrative dissonance not altogether salvaged by the piece’s overall tone of knowing irony.

Both modern day and fantasy scenes are skilfully choreographed and the cast showcase their musical and dramatic versatility in quicksilver switches between these two parallel worlds. The realistic side of the play is built around a lively repertoire of songs that display the authors’ wit and serve the performers’ vocal range through frothy pop, power ballad and even touches of hip hop. By contrast, its fantasy counterpart is mired by a musical monotone only enlivened by the gusto with which the actors deliver some of their parodic medievalisms. In this regard, special mention must go to Niamh Murphy, as the Captain, whose rolling “R’s” reverberate through the theatre as if she had been possessed by the ghost of Rex Harrison in My Fair Lady.

Dragon works better when it follows Setanta (Eoin Ó Dubhghaill), a shameless Don Juan and a bit of a “dick”, by his own admission, swiping his way through a multitude of conquests which he drops as soon as the next match on Tinder will allow. These include Martina, a “Mediterranean Aphrodite” from Florence; as well as Maria, “a feisty Spanish beauty from Malaga” and Matilda, from Paris, as he fondly remembers in one of the show’s most memorable numbers. Ó Dubhghaill sings his way through the song with a roving eye and a wry smile on his lips as the three female members of the cast (Gráinne Blumenthal, Niamh Murphy and Orlaith Ní Chearra) punctuate his musings with a well-timed chorus consisting only of the word “swipe”. The song is one of the many amusing numbers that parse the dramatic scenes in this piece and they are all well served by the performers’ talent as solo and harmony singers.

There is no serial heartbreaker worth his salt without an admiring sidekick to fete his triumphs and this part is played by Connor Lyon, most amusingly in a very well-executed vignette involving rapid text messaging in a darkened stage; the actors’ faces illuminated by the glow of hand torches turned mobiles. On their part, the female characters, strong-willed and quick-witted and performed with intelligence and verve, present greater and more engaging challenges to our hero than the dragon symbolizing his troubled masculinity. After all, as Medea proves, hell hath no fury like a woman scorned.